A Philadelphia physician raised $500,000 and is sending oxygen tanks to help India battle its Covid crisis 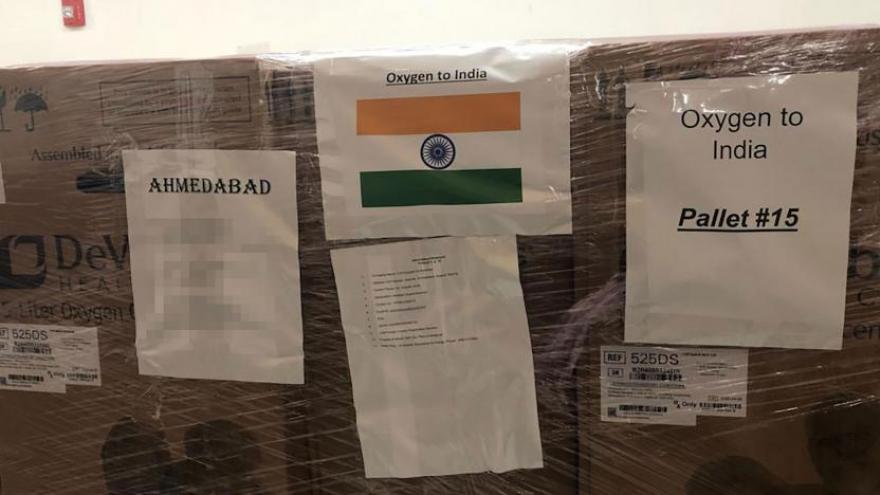 Ruchika Talwar, a 28-year-old resident at the University of Pennsylvania, said she and a group of area physicians have raised almost $500,000 to help those in India. Editors note: Parts of this image have been obscured to protect sensitive information.

(CNN) -- A urologic surgery resident in Pennsylvania is raising money to help India as it battles a horrific Covid-19 outbreak.

Ruchika Talwar, a 28-year-old resident at the University of Pennsylvania, said she and a group of area physicians have raised almost $500,000 in one week to help send supplies directly to state-run hospitals in India that are in dire need.

The country's Covid-19 crisis has surpassed its peak, experiencing the world's worst outbreak, with new cases staying well above 300,000 every day and continuously breaking the record for the highest single-day figure globally.

With a limited oxygen supply, a minimal amount of hospital beds and more patients than doctors, some patients are actually begging to leave due to lack of resources.

"Where is the support there?" Talwar said. "How are we using WhatsApp sitting here in New Jersey and Philadelphia? It's just beyond me that they have to reach internationally just to get beds in their home town."

After seeing the devastation and feeling a sense of helplessness for their country, Indians from around the world -- including Talwar -- are stepping up to lend a hand through grassroots efforts.

Talwar said her phone is filled with thousands of messages from people looking to help.

A feeling of needing to 'step up and do the work'

A week ago, Talwar sent a tweet and an email to 30 friends and family members with a fundraising goal in mind.

She, her mom and her mom's medical school friends -- graduates from Maulana Azad in Delhi -- wanted to send 50 oxygen concentrators to their classmates on the ground. Each medical grade concentrator costs $500, according to Talwar.

The nearly half a million they have raised since has helped send oxygen concentrators, supplies and shipping arrangements directly to state-funded hospitals they've personally vetted.

That latest list includes: Ram Krishna hospitals in Lucknow and Kolkata, Civil Hospital in Ahmedabad and KEM in Mumbai.

"Money is one thing, it's easy to hit send, but we really need people to step up and do the work," Talwar said. "To be honest, if you have mistrust in the system, it's not enough to just say 'we don't feel comfortable donating' or 'I'll just give a small amount,' we need people to take on the initiative and make sure the work gets done because if not, people are dying, people are suffering and not everyone needs to do that but you need small groups of people to make real change."

Talwar has been posting progress photos on her Instagram account so those who donated can see exactly where their money is going, when it's going and how it's making its way to the places that are in desperate need of them the most.

She credits the transparency in the process to her and her group's success thus far.

"My first and foremost concern is for the patients, that's my role as a physician," Talwar said. "So we're just a group of a couple of physicians trying to get help where help is needed and people keep giving me feedback that I'm giving them transparency and telling them where these concentrators are going and that they can see where their money is going."

"Penn Medicine and the University of Pennsylvania committed a combined $50,000 in matching donations for funds raised to provide the urgent and essential needs for health care infrastructure and medical supplies in those areas of India most in need of support," a Penn Medicine spokesperson told CNN Wednesday.

"Inspired by Dr. Talwar's efforts, in just six hours, the Penn community surpassed our $50,000 fundraising goal, enabling us to get to a $100,000 total donation to support her work and other groups providing aid to India in just the first day of our campaign."

Others are also using social media to help raise awareness

Karishma Porwal, who was born and raised in Indore, a city in central-west India, said seeing her home country ravaged by Covid-19 has been overwhelming.

At times, she said she's felt helpless as a Canadian resident, especially with her grandparents still living there.

That's why the 23-year-old said she spent hours researching smaller, community-based organizations that are helping during the pandemic so she could highlight on her Instagram account.

Porwal's Instagram post has several slides informing people -- specifically "Indians living away from India" -- how they can help. It has caught the attention of many in part, she believes, because of its visual messaging.

"As Indians living away from India, many of us feel helpless watching a health calamity spread through our home country," the post, which garnered more than 26,000 likes, reads.

"Even before the pandemic, India was riddled with income inequities. This has resulted in the poorest of India's population becoming the most vulnerable to dying from the pandemic: not just from symptoms of the virus, but also from hunger-- as many cannot go to work and India has little social security."

Porwal said she specifically wanted to feature groups that show photos, videos testimonials and documentation to support the causes they state that they are serving.

"It's hard to process hundreds of thousands of deaths a day, I think we, as a society, sometimes we become desensitized to numbers but eventually those numbers become names," she said.

Anurag Mairal, the director of global outreach programs at Stanford Byers Center for Biodesign at Stanford University, has also been raising awareness and helping garner donations on social media.

From his home in San Francisco, Mairal has partnered up with Sewa International, a non-profit humanitarian effort he is a member of, to help raise money for those hit hard by the pandemic in India.

Mairal, 51, said he has lost former neighbors and friends he grew up playing with back home in Chhattisgarh, a state in central India, to Covid-19. With his parents and sisters in India, Mairal said he's even more committed to relief efforts in this second wave.

"I have so much gratitude for people stepping up," Mairal, who is also an adjunct professor of medicine, told CNN. "I think it's a global response now and it's so impressive."

As of Wednesday, the organization reached its 101,000-donor mark and raised over $7 million from its Help India Defeat COVID-19' Facebook campaign.

"I think it just shows that so many people care," Mairal said. "We started with a modest monetary goal but quickly realized the needs on the ground were much worse."

So far, about 2,500 oxygen concentrators and about 2,000 ventilators have been sent to parts of India, according to Mairal.

"There's not a single South Asian that I've met in the Bay Area that hasn't been affected by the pandemic," he said. "If we want to build a global society that helps each other, we have to build up that community. We must come together and we must help."

How has the India Covid-19 crisis affected you and your loved ones?