A Pennsylvania waitress was shocked when she received a $3,000 tip 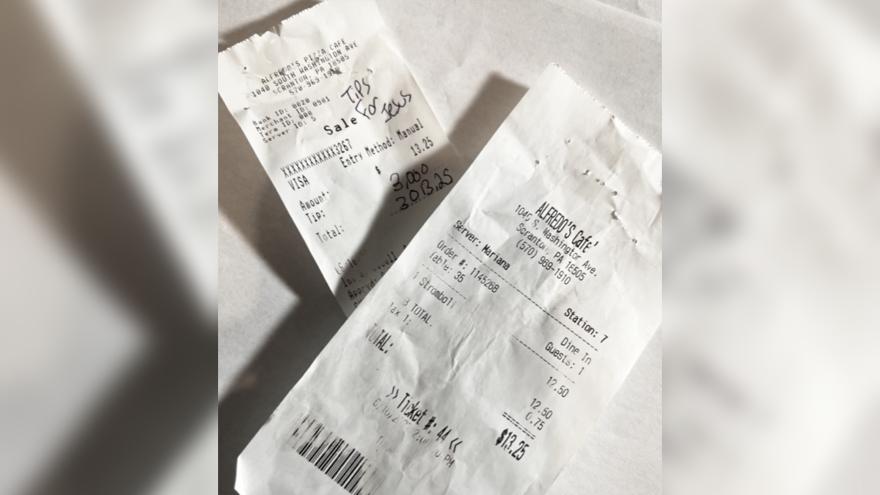 Eric Smith, an out-of-town customer, enjoyed a homemade stromboli at Alfredo's Cafe in Scranton, Pennsyslvania, on June 16. When it came time to pay for his meal, he was so impressed with it and his service that he wrote in a $3,000 tip for his server, Mariana Lambert.

"When the time came to pay his check, Lambert came into my office with tears in her eyes and shaking, stating a customer was leaving her a $3,000 tip on his $13.25 bill," said Matt Martini, a manager at Alfredo's, in a statement shared with CNN.

Another manager, Zachary Jacobson, was also at Alfredo's when Smith stopped by.

The restaurant serves customers from "all walks of life," Jacobson told CNN. Jacobson, who has worked at the family-owned restaurant for over a decade, told CNN that he was dropping in at the restaurant on his day off when Lambert received the generous tip.

He asked Smith about the inspiration behind his unexpected gesture.

"He said he was involved in cryptocurrency. He was just trying to give back to the community," said Jacobson. "He's originally from the area."

The restaurant had never received a tip this large, Jacobson says.

"I'm happy to see that people are giving back," he said. "It's a very hard industry to be involved in, especially during Covid."

The customer also wrote "Tips for Jesus" on his credit card receipt in a reference to a social media trend, Jacobson says. The phrase seems to be a reference to the Instagram account "tipsforjesus," which for several years has been operated by an anonymous user leaving large tips on restaurant bills.

Jacobson added that the huge tip "really helped out" Lambert, who has been working at the restaurant for around two years.

"It's good to know there's still good people out there," he said. "It helped her out a lot."

He hopes that the story helps customers remember "to be kind, and definitely be patient in our industry."