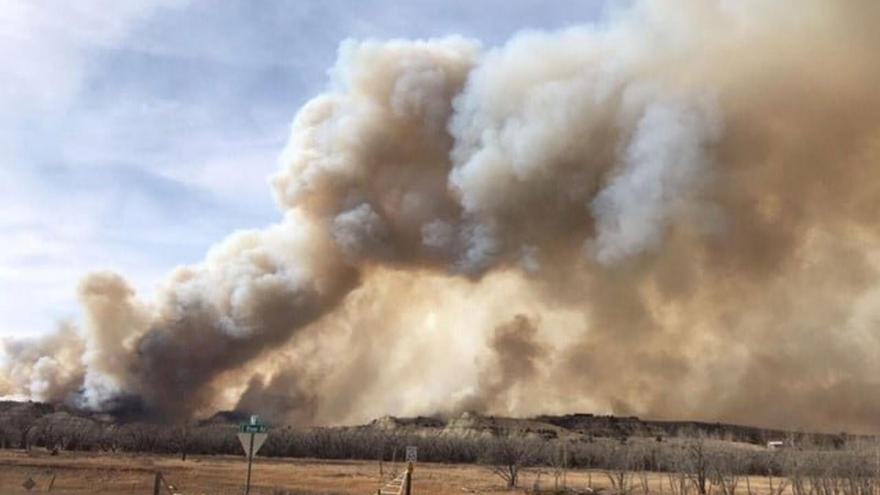 Wildfires burn near the town of Medora, North Dakota.

(CNN) -- North Dakota Governor Doug Burgum declared a statewide emergency Thursday as wildfires led to the evacuation of one small town in the state.

The declaration will allow the National Guard to deploy two UH-60 Black Hawk helicopters to help fight the fires, the statement said.

The governor has put the state's National Guard on standby for wildfire response and the town of Medora in Billings County has been evacuated. Medora is about 25 miles east of the Montana border and has a population of around 130 people.

The US Forest Service-Dakota Prairie Grasslands warned people to avoid the area southwest of Medora to give emergency responders easy access to the fire, according to a Facebook post. It also asked people to "drive cautiously" because smoke from the fire is reducing visibility in the area.

"North Dakota must be prepared to respond to wildland fires during periods of ongoing dry conditions and drought patterns," Burgum said in a statement. "At this time, North Dakota has an elevated spring and summer fire potential; a significant number of fires have occurred to date."

With the emergency declaration, National Guard members will be able to support local, tribal, federal and state efforts in fire emergencies, the statement added.

So far this year, the North Dakota Forest Service has received reports of more than 140 wildfires that have burned over 30,000 acres in total. By comparison, 9,205 acres were burned in 518 wildfires reported to the Forest Service during all of 2020.

A state of emergency has also been declared in neighboring South Dakota due to wildfires that led to evacuations and prompted Mount Rushmore to close earlier this week. The park has since reopened.

"We are grateful to the multiple agencies and firefighters that provided a swift response enabling the reopening of the park," Superintendent Michelle Wheatley said in a Facebook post.

The state of emergency in South Dakota will run through June 1 due to "severe drought and dangerous fire conditions," a statement from the governor's office said.