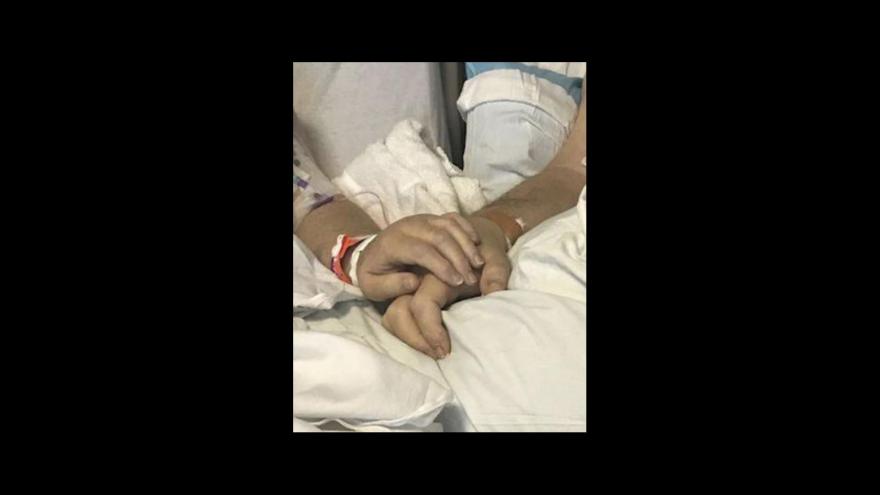 Johnny and Darlene Peoples holding hands shortly before they both died.

(CNN) -- A couple married for 48 years, and together for over 50, died of coronavirus only minutes apart holding hands.

Johnny Lee Peoples, 67, and his wife Cathy "Darlene" Peoples, 65 started feeling symptoms at the beginning of August, but would not make it to see more than two days of September.

"The message our family would like to convey is that Covid is real. It's not a hoax or a joke. Our parents took the proper precautions but tragically still contracted the virus."

The couple is admitted to the hospital the same day

They were both North Carolina natives and lived in Salisbury.

Johnny served in the US Army for over 17 years and retired from the North Carolina Department of Correction a few years ago. Darlene worked at Rowan Family Physicians where she was employed by LabCorp and was supposed to retire on September 1, the day before she and her husband died.

Darlene had a fever on August 1 and had a coronavirus test that week. Shane said that on August 10 she tested negative, which the family believes was a false negative because she later tested positive at the hospital.

Johnny started having symptoms on August 5 and tested positive on August 7. Then on August 11, both were admitted to the Covid-19 unit at their local hospital, Novant Health Rowan Regional Medical Center, because of difficulty breathing due to previous illness.

Darlene had high blood pressure, fibromyalgia, and Type 2 diabetes, while Johnny had pneumonia two years ago that caused some damage to his lungs, Shane said.

They fight until the end, holding hands

"(On September 1), we were told they had no chance of surviving. Dad could continue to live on the ventilator but would never come off of it. Mom's organs were failing," Shane said.

The next day, they were placed in the same room next to each other. They were taken off the ventilator and died a few minutes apart.

"They both had pre-existing conditions. Just keep in mind, these didn't kill my parents, Covid-19 did," Shane said.

"This was the first time for that ICU staff to deal with two family members passing. The hospital staff was amazing through the whole thing."

The couple is survived by their three children and nine grandchildren.

In their memory, the family is asking for donations to Dr. Vandana Shashi's Genetic Sequencing Research in the Department of Pediatrics, Duke University School of Medicine since two of their grandchildren have rare unnamed genetic disorders.

"My parents weren't just a blessing for me, my brother, my sister, our spouses, and our children. They were a blessing to every person that met them... I just wish everyone could see them through my eyes. You would see the two most loving and caring couple, ever. Without them, this world just got a bit more gloomy."