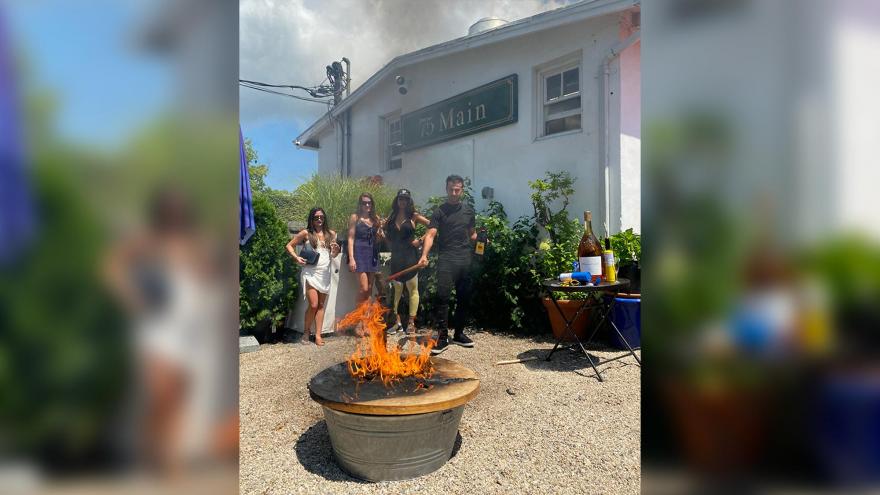 Zach Erdem, the owner of 75 Main in Southampton, lit the table that Jeffrey Epstein and Harvey Weinstein used to sit at on fire.

(CNN) -- A New York restaurant where Jeffrey Epstein and Harvey Weinstein were frequent visitors decided to start a new chapter by lighting the two disgraced moguls' regular table on fire.

Zach Erdem, the owner of 75 Main in Southampton, said he wanted to erase their names from his restaurant's history.

Epstein, who was awaiting trial on federal charges accusing him of sexually abusing underage girls, was found unresponsive in his cell at New York's Metropolitan Correctional Center in August of 2019. Law enforcement sources told CNN he died by suicide. Weinstein, a former Hollywood producer, was sentenced in March to 23 years in prison after being convicted of committing a criminal sex act in the first degree involving one woman and rape in the third degree involving another.

When visiting 75 Main, the two used to dine at Table 1, according to Erdem.

"When I thought about it, like Jeffrey Epstein used to sit at this table, all I could think was I need to burn this f------ table and make sure nothing is going to stain my restaurant," Erdem, 39, told CNN.

"I got my hammer and my fuel and I broke it, burned it, and threw it in the garbage. It felt so good actually. Now I don't have to think about these guys anymore."

Erdem -- surrounded by local residents and waitstaff -- said he broke the table using an ax and a sledgehammer before dousing it in lighter fluid and lighting it on fire as people cheered and chanted "Burn, Epstein, burn!"

Along with "getting rid of their bad energy," Erdem said he did it to send a clear message to everyone who plans to visit 75 Main:

"People who abuse women are not welcome here."