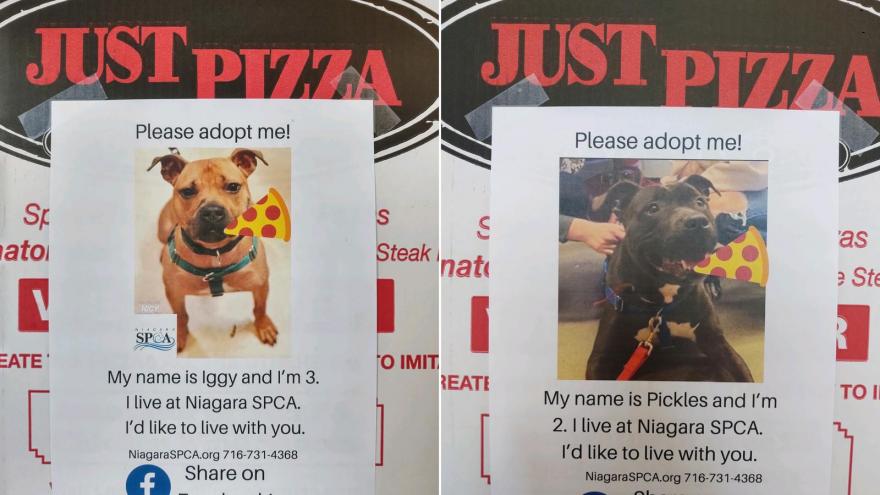 (CNN) -- When ordering a pizza, you expect to receive it in a plain cardboard box that you throw away once you're full.

But a New York pizza shop is giving their customers an especially adorable treat to go with their munchies while helping out a community organization at the same time.

The Just Pizza & Wing Co. franchise in Amherst, New York, is attaching flyers of adoptable dogs to its boxes.

And the yummiest part? Anyone who adopts a dog featured on a pizza box flyer will receive a $50 gift certificate to the pizza shop.

The unique idea came after Mary Alloy, who owns the pizza franchise with three of her children, began volunteering with the Niagara Society for the Prevention of Cruelty to Animals (SPCA). Alloy worked with Kimberly LaRussa, an SPCA event coordinator, to come up with ways to help more shelter animals find their forever homes.

"Kimberly texted me one night and was like, 'Hey, what would you think about putting pictures of the dogs on pizza boxes?' and I just couldn't wait," Alloy said. "We are all animal lovers here, so I got permission from the franchise to do it and immediately got to work."

On Friday, customers of the pizza shop began receiving orders with photos of sweet pups who need to be adopted attached to boxes. Alloy said the reaction from customers has been the best part.

People are "absolutely loving" it, and after just a single day of putting the flyers on pizza boxes, a 6-month-old puppy named Larry was adopted on Saturday.

"We've had a tremendous amount of interest and support from the community and beyond since the story went viral on Friday," LaRussa told CNN. "Many people want to order a pizza just to get the shelter dog photo, other pizzerias have offered to put flyers on their pizza boxes, and so many people are tagging their friends and family."

The shop is getting a lot more business, according to Alloy. While the restaurant usually uses about 600 to 800 boxes every week, it has already gone through 500 boxes since Friday.

A history of giving back

Alloy's generosity goes beyond her passion for helping animals.

She is constantly finding ways to give back to her community, including her involvement with hospice care, non-profit medical organizations, autism centers, children's hospitals, and animal shelters throughout Buffalo.

"I try to do whatever I can for other organizations who need help," Alloy said. "We have donation boxes all over the store. Anything I can do to the help the community, I'm going to do it."

Alloy said she's always wanted to volunteer for the SPCA, but as a small-business owner, she doesn't have the time do it herself. Instead, she brings food to events and offers whatever help she can.

"I sent her a flyer for her approval for the boxes and she said she broke down in tears," LaRussa said. "That's just the kind of person she is. We are so grateful to Mary and Just Pizza."

While both the pizzeria and shelter have already been flooded with calls and comments about the adoptable animals, they don't plan to stop anytime soon.

In fact, LaRussa said customers at the pizza shop can start expecting their orders to come with flyers of adoptable cats.

The shop will continue with the effort "for as long as it takes" to get every animal in the shelter adopted, Alloy said.

While other animal lovers might be a little jealous their pizzas aren't coming with photos of adorable animals, the idea is spreading quickly. Other pizza shops, like Papa Louie's Italian Kitchen & Motocross Cafe in Ohio, have already launched similar efforts and credited Alloy for the idea.