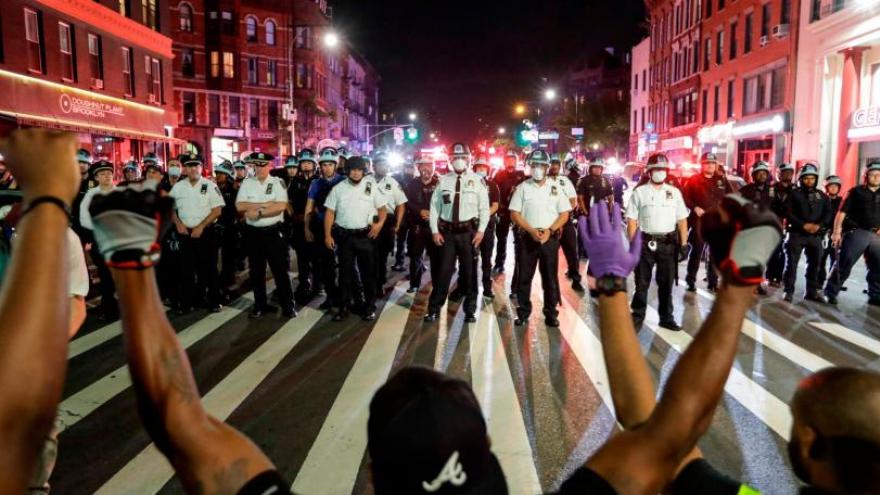 (CNN) -- The NYPD officer who was caught on camera shoving a woman to the pavement during anti-police brutality protests that roiled New York City last week was charged with assault by the Brooklyn District Attorney's office on Tuesday.

Officer Vincent D'Andraia, 28, is the first NYPD officer to face criminal charges from the protests in response to the police killing of George Floyd in Minneapolis.

Prosecutors and the NYPD are reviewing videos and complaints from the demonstrations to determine if other officers should face charges, and local and state leaders are calling on reforming the NYPD, including slashing the department's budget and putting in place measures that hold officers more accountable.

D'Andraia turned himself in at a police precinct in Brooklyn Tuesday morning. He faces charges of assault, criminal mischief, harassment and menacing, Brooklyn district attorney Erik Gonzalez said in a statement.

The officer cursed at the protester, knocked the cell phone out of her hand, and then shoved her to the ground, "causing her to strike her head on the pavement," according to the criminal complaint. The victim suffered "substantial pain" to her head and back, had a seizure and a concussion, and was taken to a hospital, the complaint said.

"As District Attorney I cannot tolerate the use of excessive force against anyone exercising this Constitutionally guaranteed right," Gonzalez said. "This is especially true of those who are sworn to protect us and uphold the law. I am deeply troubled by this unnecessary assault. We will now seek to hold this defendant accountable."

In his video arraignment Tuesday at Brooklyn Criminal Court, D'Andraia was seen behind bars in a jacket and tie while wearing a mask. He was not handcuffed.

When asked if he aware of the charges he faces he answered "yes" and did not speak throughout the rest of the short proceeding.

Stephen Worth, the officer's attorney, objected to video of the arraignment given the publicity surrounding case. Judge Levy Abadi denied that "in the public interest."

The government consented to D'Andraia's release.

The judge ordered D'Andraia to refrain from any contact with Dounya Zayer, the woman he allegedly shoved.

D'Andraia was caught on cell phone video aggressively shoving Zayer, 20, during a demonstration near the Barclays Center.

Zayer was in the street when the officer "told her to move," prosecutors said.

"As she asked why, the defendant allegedly smacked her cell phone out of her hand, and violently shoved her to the ground, according the investigation," prosecutors said. "She can be seen rolling on the street and into a curb. Meanwhile, the defendant and fellow officers can be seen to continue walking."

D'Andraia was already suspended without pay by the NYPD for his role in the incident, and his case has been turned over to the NYPD's department advocate to determine if there is any disciplinary action needed, which could include termination.

The Police Benevolent Association, the union that represents the officer, said the move to charge him was politically motivated.

"Once again, Mayor (Bill) de Blasio and the NYPD brass are sacrificing cops to save their own skin," said union president Patrick J. Lynch in a statement. "They created the failed strategy for managing these demonstrations. They sent police officers out to do the job with no support and no clear plan. We are utterly alone in our efforts to protect our city."