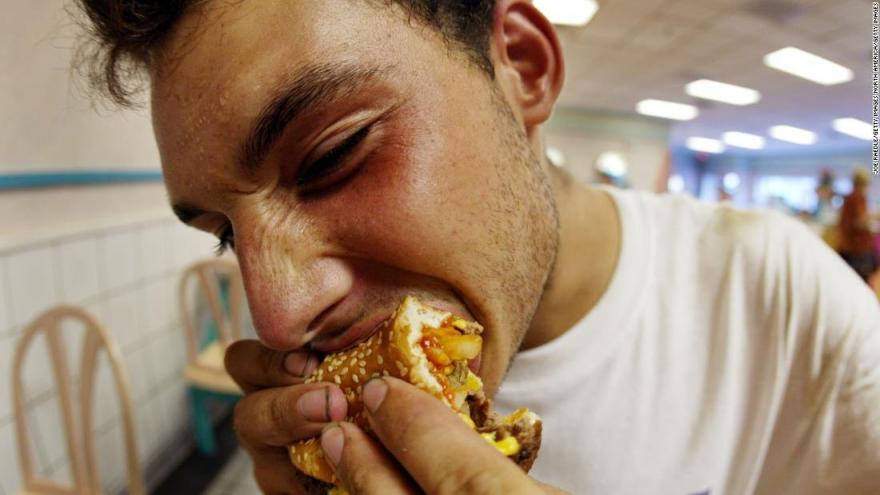 (CNN) -- Are you a glass half-full sort of person? Well, then, get ready for some good news. You and your fellow Americans are doing a better job of eliminating crummy carbs and sugar from your diet.

That's the takeaway from a new "report card" on the American diet, which found that since 1999 we are eating nearly 3% fewer highly processed foods with added sugars. The study, published Tuesday in JAMA, analyzed the eating habits of nearly 44,000 adults between the years of 1999 and 2016.

Now drink down that glass of water, because the complete picture is not that rosy. We're still eating way too much of what's not healthy. In fact, 42% of a typical American's daily calories came from refined grains, starchy veggies and added sugars.

Even worse, the intake of saturated fat remained above 10% of daily calories, due to a high consumption of meat, especially red and processed meats, which are strongly linked to heart disease and cancer.

Only 9% of our daily calories came from whole grains and fruits.

The news was even worse for adults over 50 years old, racial minorities, the undereducated and poor.

"People with less than a high school education or living below the poverty line," Zhang said, "not only ate a worse diet than those with a higher level of education or income at any given cycle, they also did not improve their diet quality over time." The same held true for adults over 50 years and ethnic and racial minorities.

"Our study gives us insights into where we can improve our diets ... and which subgroups to target so that we can eliminate disparities in healthy eating," said co-author Shilpa Bhupathiraju, a nutrition researcher at the Harvard T. H. Chan School of Public Health.

"We can use this data in a positive way -- not to focus on what we are doing wrong, but to guide us in making healthier choices," Zhang said.

Take, for example, the concepts that eating healthy is expensive and hard to do.

"A healthy diet doesn't have to be costly," said dietitian Lisa Drayer, a CNN health and nutrition contributor. "Foods like canned beans and lentils are cheap, really healthy and a great source of plant protein."

Foods processed to help preserve and enhance nutrients and freshness of foods at their peak -- such as canned tuna, beans and tomatoes, as well as frozen fruits and vegetables -- are healthful and offer important nutrients, she says. Yogurt and milk are fortified with calcium and vitamin D.

Another benefit of canned or frozen fruits and veggies is that they won't spoil before they're eaten, a true cost-saver.

Studies show that eating a lot of unhealthy, "ultraprocessed" foods may shorten your life. Even a 10% increase in ultraprocessed foods was significantly associated with a 14% higher risk of death from all causes.

Instead choose minimally processed foods that retain most of their inherent nutritional and physical properties, Drayer says. Examples of these include washed and cut fruits and vegetables, bagged salads and roasted nuts.

Sugar is a challenge because it's hidden in so many different foods, such as pre-made sauces, condiments and breads. Since it is so hard to avoid, that makes the quality of your choices more important.

"Choose fresh whole fruit as a snack and avoid grabbing a convenience fruit snack bar that may have added sugars," Zhang said.

If you drink one can of sugary soda, you've maxed out the recommended sugar intake for an entire day, Drayer says. Because they are empty calories, they also don't give you the opportunity to consume anything healthy, sort of a "lose lose situation," she says.

And then there's the benefit to your waistline if you cut back: "If you replace one sugary beverage with water every day over the course of the year, you'll lose 15 pounds."

One way to start eating fewer ultra-processed foods is to start cooking from scratch at home, even if it's just a few meals a week at first.

"That's one of the best ways to cut out added sugars and salts and saturated fat," Drayer said.

For those with little time (isn't that everyone?) she suggests using a weekend day to prepare big portions of healthy meals and then freeze them for use later in the week.

But avoid pre-packaged ingredients when you cook (remember the ultra-processed foods), as they will just defeat your efforts.

Stretch your proteins (and save the planet)

A great way to cut back on meat and incorporate more plants in your diet is to use leftover meat as an addition to a meal the next day.

"Let's say you use a piece of fish or chicken as an entree, but then the next day you use the leftovers as part of a whole-grain pasta meal or even in a salad or soup.

Stretching your meat proteins, or better yet, replacing them with plant proteins, including legumes, soybeans and nuts, will not only make you healthier by lowering your risk for obesity, heart disease and Type 2 diabetes, it can also help save the planet.

A 2018 study found that adopting more plant-based diets could reduce greenhouse gas emissions from the food system by more than half. Another great reason for all of us to adopt a healthier diet.