A New Orleans police officer on patrol in the French Quarter was shot in the face by a pedicab passenger, superintendent says 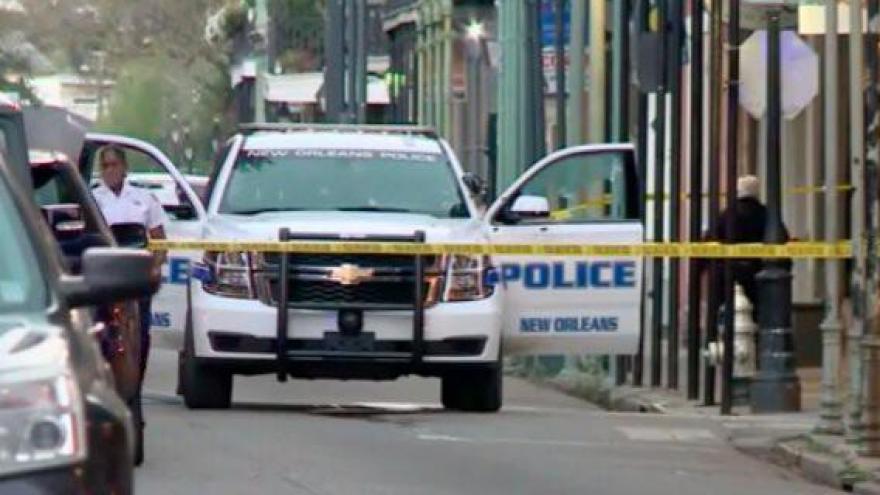 A New Orleans police officer was shot in the face and another was injured Friday when a passenger in a pedicab in the French Quarter fired at their vehicle, the city's police superintendent said.

(CNN) -- A New Orleans police officer was shot in the face and another was injured Friday when a passenger in a pedicab in the French Quarter fired at their vehicle, the city's police superintendent said.

The shooting happened Friday afternoon while the officers were on patrol. The officers had no contact with the suspect before he opened fire at their vehicle, Superintendent Shaun Ferguson told reporters.

"Two of our officers were ambushed at the intersection of Royal and St. Philip Street," he said. Video from CNN affiliate WVUE showed crime scene tape around a police SUV with its front doors open.

One officer, a four-year veteran, was hit by a bullet in the left cheek, just below his eye. He is in serious condition and is stable. The bullet is lodged in his skull, Ferguson said at a news conference near the scene.

The other officer, a 16-year veteran, had minor abrasions. Both were taken to a hospital by fellow officers who came to the scene. The officer who was shot was responsive and able to walk into the hospital, Ferguson said.

"This is a dark day for our officers, so I ask that you keep our officers and their families in your prayers," he said.

The suspect was taken into custody without incident and was sent to a hospital, the superintendent said. Ferguson added that the man, who would not identify himself, "appeared to be under some sort of medical condition."

He was not injured by police, Ferguson said. A gun was found on the ground at the scene and the suspect was wearing a holster, the superintendent said.

He added that a citizen helped treat the wounded officer.

"A retired Army veteran with medical experience was working in a nearby store and helped with the medical treatment of our officers until fellow officers arrived at the scene," he said.

"We also want to commend the citizens who pointed out the individual as officers were responding to this call," he added.

The police department is conducting an investigation.