A new metal monolith appeared out of nowhere in California, but it didn't last for long 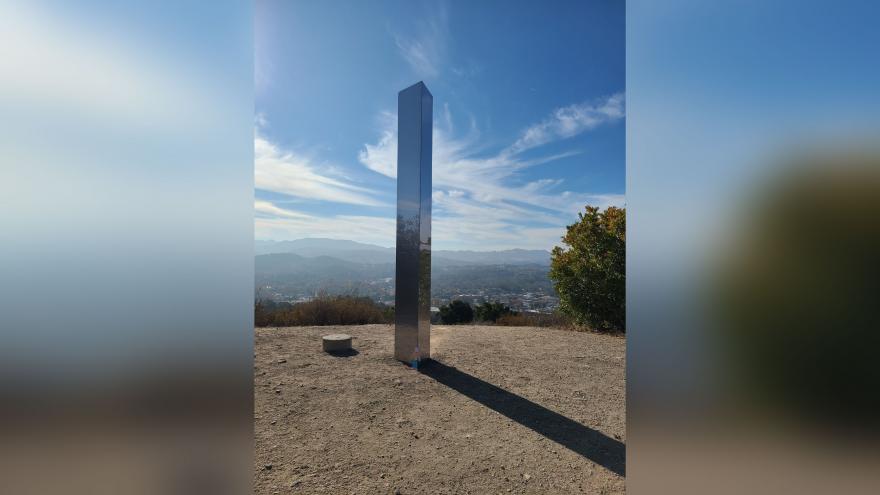 (CNN) -- A new metal monolith appeared in a California park just days after another mysterious monument disappeared from a remote spot in the Utah desert.

The silver pillar was reported Wednesday afternoon at the summit of Pine Mountain Loop at Stadium Park in Atascadero, which is nearly halfway between Los Angeles and San Francisco.

"We don't know how it got there and apparently its already disappeared," Deputy City Manger Terrie Banish told CNN. The Atascadero News reported that a group of men removed it early Thursday.

Banish said the city doesn't plan to investigate the monument, or its disappearance, but they will remove the rebar, or reinforcing rod, that was used to secure it to the ground because they don't want anyone to get hurt.

The three-sided metal monument became a bit of a social media sensation for the brief time it was in place.

Michelle Gilsdorf read about the monolith's appearance on a community Facebook page and decided to check it out for herself.

She told CNN it took about 30 minutes to hike to the object.

"I know the trail very well, it's a semi-moderate hike, my Fitbit from the trailhead on Capistrano Avenue, was .81 miles to the summit the way we walked up," said Gilsdorf. "I saw a bit of it from the trailhead, so I knew it wasn't a complete joke that something was up there."

Banish said the monolith was 10-12 feet tall and weighed an estimated 200 pounds.

"Nobody ever saw it being installed," she said, even though the trail is pretty popular.

This is the latest mystery object to appear in recent weeks, but it is not known whether they are related.

Experts have mostly ruled out aliens -- if for no other reason than UFOs would probably want nothing to do with Earth in 2020.

The first was spotted last month in Utah by a team that was counting bighorn sheep from a helicopter.

The mystery deepened last week when the Utah Bureau of Land Management reported that the monolith had disappeared.

A Colorado photographer told CNN that he saw four people pull down it down and remove it from the area. That group later announced on social media that they removed the monolith.