A New Jersey man was laid off due to the pandemic. Now he's mowing lawns for senior citizens and veterans at no charge 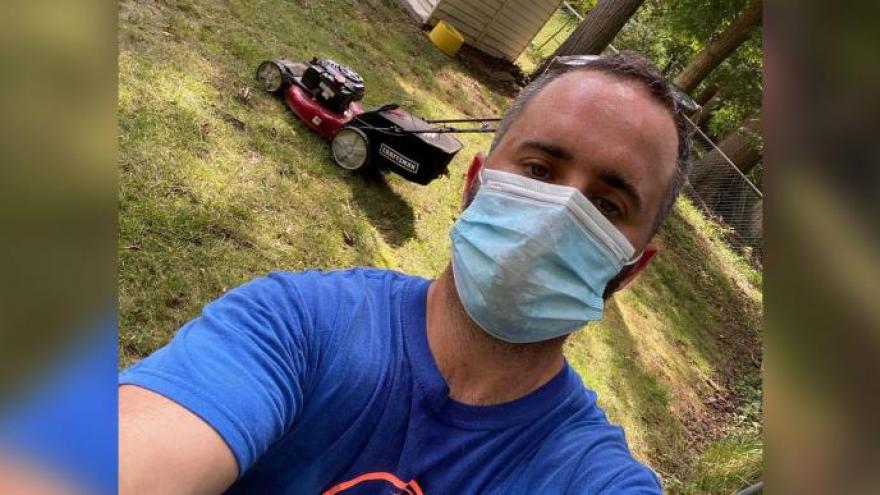 Brian Schwartz lost his job due to the pandemic. Now he's spending his time mowing lawns for senior citizens and veterans at no charge.

(CNN) -- When Brian Schwartz was laid off from his job in mid-June, he was shocked.

The 39-year-old worked hard as a New York City digital advertising executive. So, hard his wife would often pull him away from his computer.

But the ramifications of the pandemic took a toll on the economy -- and millions of Americans remain jobless.

Although his life was upended, Schwartz decided not to let the pandemic get the best of him.

With his late grandfather in mind, the Wayne, New Jersey, resident realized that senior citizens and veterans in his community were fighting greater battles against Covid-19. And he wanted to help.

Schwartz decided a lawn mowing was a socially distanced service he could provide -- at no cost -- to those over the age of 65. And so, I Want To Mow Your Lawn -- his free service -- was born.

"I just love grandparents." Schwartz told CNN. "I can only imagine the stress they're all going through. I realized a lot of them (senior citizens) are on fixed incomes, so I figured there's a creative way to help them out. Not just physically, but also mentally."

"With all going on in the world, it's the least I could do for our elderly neighbors," he writes on his website, IWantToMowYourLawn.com. "I love grandparents. I miss mine. Feels good to help out. ... Also looking to help disabled veterans! I believe that putting some good out into the universe, it all comes back."

Soon, after sending a press release to the local news to spread the word of his mission, his free lawn service began to boom.

He got his first customer at the end of June. Since then, Schwartz, who had little landscaping experience prior to his new venture, has provided for more than a dozen seniors.

Before each gig, Schwartz loads his gardening equipment into the back of his Jeep and gets to business. He makes sure to maintain a social distance by calling customers over the phone when he arrives, and sends air hugs to appreciative customers.

He doesn't accept tips -- but many have donated to help with the cost of gas, or donated toward non-profit organizations close to Schwartz's heart, which he lists on his website.

Two neighbors who also lost their jobs during the pandemic have even joined the novice landscaper on his mission.

Schwartz said he plans to continue expanding his free lawn mowing service as he figures out his next career move. He encourages others who are facing unemployment due to the pandemic to continue networking and never give up.

Until then, Schwartz said he will continue to follow his heart.