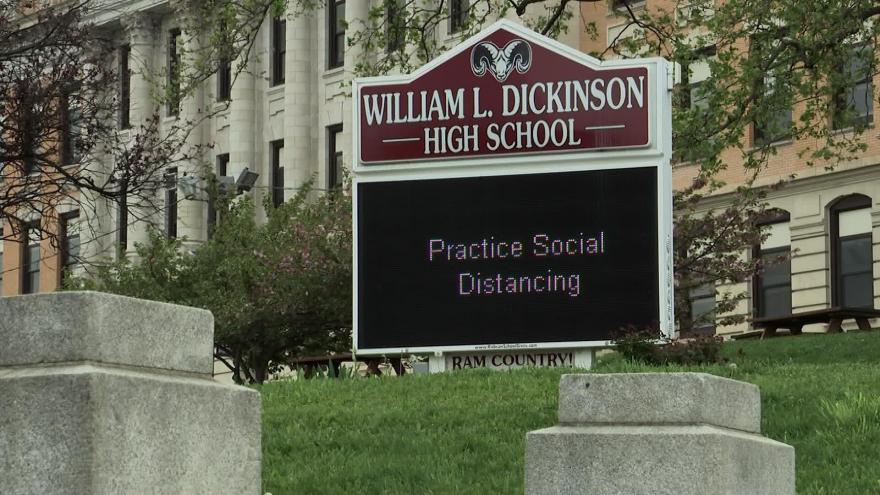 Howard Zlotkin has been suspended with pay from his post at Dickinson High School, where he is tenured, a Jersey City Board of Education official told CNN.

(CNN) -- A New Jersey high school teacher has been suspended with pay after launching into a rant during two virtual classes in which he allegedly called George Floyd a "criminal" and used profanity against his students.

Howard Zlotkin, a science teacher at William Dickinson High School in Jersey City, is also accused of singling out Black students to write an essay on "why Black lives matter," according to the high school senior who filmed his comments last week.

"The bottom line is, we make (Floyd) a f**king hero? He's not a hero; he's like a criminal," Zlotkin said in the beginning of the clip his student recorded.

Zlotkin went on: "You guys emulate people, people that are just f**king wrong, that are criminals, and you're making them right because they're Black or they've got a bad story."

The student who captured his rant, Timmia Williams, said the initial topic of discussion in Zlotkin's landscaping and design class was climate change. It's not clear when the conversation veered toward Floyd before Timmia started filming, but she said as her teacher continued to make inflammatory comments, she decided to record them in case school officials wouldn't believe her.

"I've never been in a situation where people are speaking bad on other people's race," she told CNN. "It really bothered me."

The teacher then told students that he "ain't f**king privileged," according to the video.

"I come to work, I happen to get paid by my Black vice principal who thinks I'm f**king privileged, too," he said in the video.

A student interjected and told him that "every White person is privileged," including him.

"You know what, f**k you, I'm privileged," he responded, according to the footage Timmia recorded.

Timmia left the class in tears. She said Zlotkin assigned her and three other Black students in the class to write an essay on why Black lives matter.

Timmia told her mother, Margie Nieves, and contacted school counselors about what happened in the class. Nieves told CNN that she reached out to the Jersey City Board of Education after Timmia filmed the first class but didn't hear back.

Zlotkin was back in class the next day and singled out Timmia, questioning why she hadn't completed the essay on why Black lives matter, according to a second video Timmia filmed.

When Timmia started to respond, Zlotkin interjected and repeated that he didn't think "(she) can make a case" for why Black lives matter.

The interactions soured what should've been a week of celebration for Timmia, who told CNN she'd recently been accepted to college. But the exchanges with Zlotkin made her question whether she wanted to attend.

Zlotkin is suspended with pay while the district, police investigate

Mussab Ali, president of the Jersey City Board of Education, told CNN that Zlotkin was suspended soon after the class in which he questioned Timmia. Jersey City Police and Child Protective Services are investigating along with the district, a process that has become more complicated because Zlotkin is tenured, Ali said.

The school district released a statement saying it was "appalled by the statements he made to students filled with anger, profanity, disrespect" and that Zlotkin's "views do not represent the Jersey City Public School District's focus on equity and the embrace of a very diverse student body."

Zlotkin didn't respond to CNN's requests for comment, but he told The Washington Post on Sunday that his comments were taken "out of context."

"I tell the students it's all about the facts, and I was teaching those facts. I am a science teacher," he told the Post. "My little snapshot that was posted to the world was out of this context."

Ali called the language Zlotkin used "completely unacceptable" for Jersey City Schools, which he noted is "majority minority." According to the National Center for Education Statistics, 22% of public school students in the district are Black, 29% are Hispanic or Latino, 25% are Asian and 21% are White.

"To know there is someone making comments like this ... it's not representative of this school system," he said.

Ali said Timmia is a "role model" for standing up to Zlotkin. But Timmia said she can't shake the feeling of being threatened by a teacher, something she now fears will happen in college.

"If I go to college, I don't know who's gonna treat me the same way he did," she said, holding back tears.