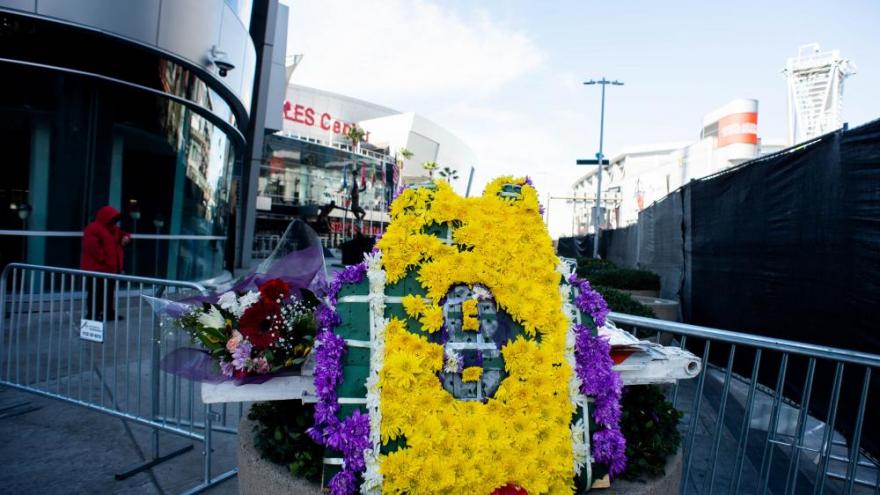 Crews behind a screened fence remove Kobe Bryant's memorial at L.A. Live on February 3, 2020 as a few scattered items are left around Staples Center. A new law in California bans the sharing of crime scene photos after images of Kobe Bryant's helicopter crash were leaked.

California Gov. Gavin Newsom signed an invasion of privacy bill on Monday which would make it illegal for first responders to share photos of a deceased person at a crime scene "for any purpose other than an official law enforcement purpose."

AB 2655 was first introduced by Assemblymember Mike Gipson after Los Angeles County Sheriff's deputies allegedly shared graphic photos of the wreckage of the helicopter crash that killed NBA legend Bryant, his daughter Gianna and seven others earlier this year. In a tweet celebrating the bill's passage, Gipson called it the "Kobe Bryant Act of 2020."

Earlier this month, Bryant's widow Vanessa sued the Los Angeles County Sheriff's Department and Sheriff Alex Villanueva over the sharing of the images.

The day of the crash, family members gathered at the Lost Hills Sheriff's Station where the sheriff assured them the crash site was secured. However, a leak from the department, according to the lawsuit obtained by CNN, led to TMZ breaking the news and fans flocked to the site.

"But the biggest threat to the sanctity of the victims' remains proved to be the Sheriff's department itself," as eight deputies "pulled out their personal cell phones and snapped photos of the dead children, parents, and coaches. The deputies took these photos for their own personal gratification," the lawsuit states.

Vanessa Bryant also filed a wrongful death lawsuit earlier this year against the helicopter companies and pilot who died in the crash.

Under the new "Kobe Bryant Act," beginning in 2021, a first responder who is found guilty of the misdemeanor crime may be fined up to $1,000 per violation.