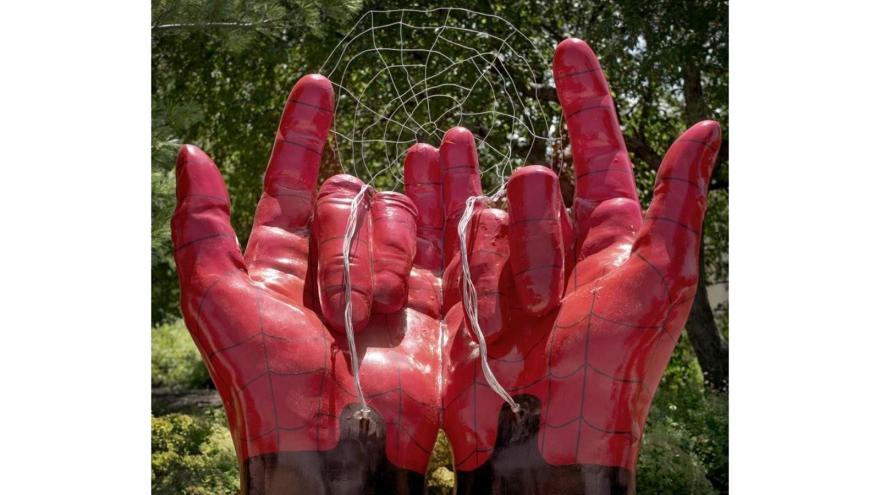 **Embargo: Lincoln-Hastings-Kearney, NE** A woman in Lincoln, Nebraska, is fighting the city over what she says is a sculpture depicting devil horns at the Lincoln Children's Zoo. It's actually just Spiderman's hands shooting a web.

(CNN) -- A woman in Lincoln, Nebraska, is fighting the city over what she says is a sculpture depicting devil horns at the Lincoln Children's Zoo.

In a written complaint to Lincoln Mayor Leirion Gaylor Baird, the woman demanded the city move the sculpture.

"It is a sculpture of two hands open, painted Red & Black, and formed into Devil Horns," the complaint reads: "This is anti-Christian, and demonic, and completely inappropriate and offensive to place in front of the Children's Zoo and the Gardens where couples are married."

A city official, Lin Quenzer, responded to the concerned woman via email to explain that this isn't a city issue and that the sculpture is just one of 50 installed throughout the city for a charitable cause, according to CNN affiliate Lincoln Journal Star.

"Campus Life chose hands as a representation of its mission to serve the community and reach out to teens in difficult circumstances," Quenzer told CNN.

For the public art project, the City of Lincoln allows four sculptures to be placed on city property. The artwork in question is one of four pieces on city property, according to Quenzer.

She says the city was not involved in choosing which pieces ended up on public rather than private property.

In an email, Matt Schulte, the nonprofit group's executive director, explained to the concerned citizen that the colors of the sculpture correspond to the Spider-Man character's attire and appearance.

"It absolutely surprised me," Schulte said. "We are a Christian organization that has been impacting kids for a long time ... clearly we would have never have put something out there that celebrated the devil," he told CNN.

Schulte said when the Spider-man sculpture was installed in May, it didn't have the spider webs coming out of the hands because it was a work in progress.

He said he can try to understand why she may have been offended for the two weeks that the hands didn't have the web attached to them.

According to Quenzer, the Spider-Man sculpture, along with the others in the collection, will be auctioned in October with two-thirds of the proceeds benefiting Campus Life. The remaining proceeds from each sale will go back to the artist.