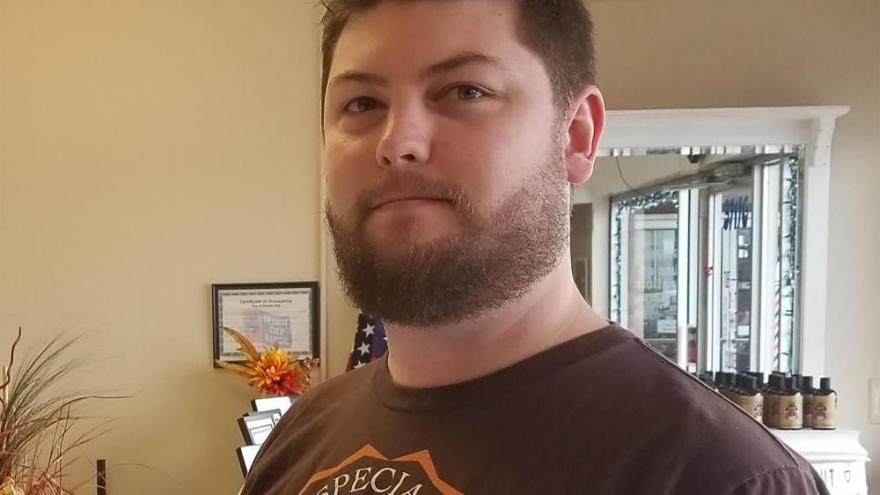 29-year-old US Navy veteran died when a tornado hit an Amazon warehouse in Edwardsville, Illinois, on Friday night.

(CNN) -- The horrific tornadoes that ripped through as many as eight states late Friday and early Saturday are being blamed for at least 88 deaths, officials said, and family members and friends of the victims are reeling from the losses.

In Kentucky, at least 74 people have died, according to Kentucky Governor Andy Beshear, who added the number is expected to rise. In addition to the deaths in Kentucky, 109 residents remain unaccounted for, Beshear said.

At least 14 people have been killed in four other states -- six in Illinois, four in Tennessee and two each in Arkansas and Missouri -- officials have said. This is the deadliest tornado day in December on record.

Here's what we know about some of those killed.

Six family members lost their lives when a tornado hit their home in Bowling Green, Kentucky on Friday night, a relative told CNN.

Rachael and Steven Brown, were with their four kids and Rachael's mother, Victoria Smith, when a tornado hit their home.

The Browns moved to Bowling Green after Steven accepted a job offer two years ago, according to McGee.

The infant, her two brothers, and her parents, Douglas and Jackie Koon, were sheltering at her maternal grandmother's house when the tornado hit.

Oaklynn's parents tried to protect their children by putting them in the bathtub and covering them with couch cushions. But the tornado picked up the home, and the family landed on the other side of a neighbor's house, Carman said.

"We didn't have much time with her, but we loved the time we got to spend with her," Carman told CNN.

Roughly 30 minutes before a tornado ripped apart her home, Marsha Hall, 72, sent texts to each of her three children, telling them she loved them. It was the last time they would ever hear from her.

Hall and her sister, Carole Grisham, 80, took cover in their hallway as a tornado roared around them. Nearly 12 hours later, the two sisters were found dead among the rubble, several houses away from their own in Dawson Springs, Kentucky.

"Everybody thought the world of them," said Jason Cummins, Hall's son, with tears in his eyes. "They were the sweetest, nicest people who were always thinking about everyone else before themselves."

Neighbors and friends described them as pillars in the community and best friends who took care of each other. "Neither one of them could imagine life without the other," Cummins said.

They both grew up in Dawson Springs and worked at the local funeral home at different points in the lives, following in the footsteps of their mother, who did the same. They greeted people, put out flowers, and carried out other preparation duties for funerals.

District Judge Brian Crick was killed in the tornadoes, according to a statement from the chief justice of the Kentucky Supreme Court.

"This is a shocking loss to his family, his community and the court system, and his family is in our prayers," wrote Chief Justice John Minton.

Crick was 43, according to the Lexington Herald Leader, and served McLean and Muhlenberg counties.

Diane Varney, 62, passed away when a tornado demolished her home in Moorman, Kentucky, her children told to CNN. Varney was with her three grandchildren, son-in-law, and daughter when their home was hit by a tornado, her son, Ricky Beckman said.

"She was loved by anybody that knew her. She didn't know no strangers. She would help anyone who needed it. She would take her shirt off her back for anybody," Beckman said.

"She was a loving and supportive mother," said Jenny Bechman Shemwell, adding that she adored her grandchildren. "Her grandkids were her world," she said.

Her funeral was held on Monday.

Graves County Deputy Robert Daniel met his son at a barbershop Friday morning to give him an early Christmas present.

It was the last time the two saw each other, Zachary Daniel told CNN. His father was killed when tornadoes ripped through Mayfield around midnight Friday.

"That night was just horrible. I still don't believe it," Zachary Daniel said of the death of his 47-year-old father.

His dad was supervising inmates on a work-release program and Friday night was his first time on the night shift at the Mayfield Consumer Products candle factory, said Zachary, who also works there.

Jailer George Workman said Daniel "gave his precious life while physically ensuring that his seven inmates were moved into a safe location, from which they all survived. He was just unable to get there himself in time."

Zachary called his father a great person and a loving grandfather.

Janine Williams was among the eight people confirmed dead after a tornado tore through the candle factory in Mayfield, Kentucky.

Her husband, Ivy Williams, was one of the people helping to pull trapped workers out the debris. He told CNN his wife was considered missing when the Graves County coroner's office called him with the news.

Williams and her husband had four children together and 19 grandchildren.

The family of Clayton Cope, a 29-year-old US Navy veteran, confirmed to CNN he died when a tornado hit an Amazon warehouse in Edwardsville, Illinois, on Friday night. Six people died at the facility, according to officials.

His mother, Carla Cope, told CNN her son was "a really good kid." He would have turned 30 on December 27, she said.

"He loved to hang out with his friends," she said. "He was big-hearted; he would do anything for anybody."

Clayton followed several other men in the Cope family by serving in the Navy, his mother said. His six-year stint included working as a calibration specialist on aircraft carriers, she added.

Clayton had worked for Amazon for just over a year as a maintenance mechanic, Carla Cope said. His father also worked at the facility in the same position.

"Had (Clay) not been there, his father would have," she said.

Carla Cope said she last spoke with Clay shortly before the tornado hit. She told him the storm was coming and remembers him talking to someone nearby, telling them they needed to go make sure the other employees knew as well.

Austin McEwen also worked at the Amazon warehouse in Edwardville.

"Austin was a beautiful soul, loved by all who met him. ... He was a talented baseball and hockey player. He loved the outdoors and his hunting dogs," said a description on a GoFundMe page.

McEwen, of Edwardsville, Illinois, "graduated from Vatterott College with a degree in mechanics," the page said.

Other victims at the Amazon warehouse

Madison County Coroner Stephen Nonn released the names of the others who died at the Amazon distribution center. They were Deandre Morrow, 28, of St. Louis; Kevin Dickey, 62, of Carlyle, Illinois; Etheria Hebb, 34, of St. Louis; and Larry Virden, 46, of Collinsville, Illinois.

Steve Gunn, Jr., 50, and his son Grayson, 12, from Tallahassee, Florida, died when a tornado hit the resort they were staying at in Tiptonville, Tennessee, family members told CNN.

Sandy Gunn, Steve's sister, said her brother-in-law, Jamie Hall, was also missing and authorities in Tennessee are continuing to search for him. They were part of a larger group on a duck hunting trip in Tiptonville.

Alerts on their phones alerted the group to the tornado warning on Friday evening, Sandy said. Some of the group -- Jamie, Steve and Grayson -- went to bed on the second floor of the resort, while others stayed up and even went outside.

Some took refuge in a bathroom stall and tried to use their bodies to shield the children they were with as the tornado tore through.

"They walked out and the only thing standing was the bathroom stall," she said. "The top floor where my brother and my family was, was just gone."

Sandy said her brother Steve was the hardest-working man she knew. "There was nothing that he couldn't do with his hands," she said. "There was never a friend that called him that he didn't run and help."

Steve adopted Grayson when he was a baby. "His daddy was teaching him how to be a man," she said of Grayson. "He was such a respectful kid."

Steve leaves behind a daughter, and a granddaughter he had yet to meet, Sandy said.

The family is still in the process of planning funeral services. Because Steve was so beloved in the community, they were having difficulty finding a venue that will be able to host the expected attendees, she said.

Jeff and Jennifer Eckert, were together in their home when the tornado hit, according to family members.

The couple had been married for 14 years and had recently moved back to Dawson Springs full time, after spending years living in Florida during the winter, according to Jennifer's daughter, Amy Blades.

Blades describes her mother and stepfather both as full of life, with a love of traveling, and doing anything for their grandchildren.

"They were completely night and day, but I feel like they saved each other. They loved traveling and had fun. They were perfect together," she said.

Jeff was originally from Ohio and had played in several bands throughout his life, Blades told CNN, and her mother was "full of laughter and always made everyone laugh."

Jennifer is survived by her two children and five grandchildren.

Sixteen people were killed when a tornado struck Warren County, Kentucky, according to the county's coroner, Kevin Kirby.

In a statement, the coroner said the victims were:

Eleven of the victims were from two families on one street, police and family members tell CNN.

The five members of the Besic family were located near their residence in the aftermath of the tornadoes. The bodies included two infant girls, police said.

The homes of the Besic and Brown families were just doors apart in the same neighborhood.

Robert Williams, Jr, 65, and Say Meh, 42, both died at the hospital due to injuries sustained by the tornado, according to Kirby.

CORRECTION: An earlier version of this story incorrectly described Robert Daniel's job at the candle factory. He was supervising inmates on a work-release program.