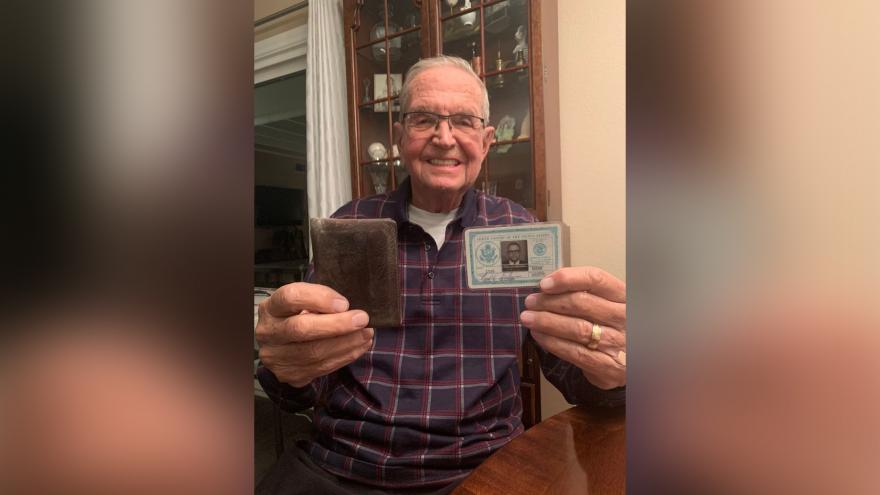 (CNN) -- Retired Navy meteorologist Paul Grisham had long forgotten the wallet he lost while stationed in Antarctica in 1968, so he was surprised when someone returned it to him two weeks ago -- 53 years later.

He was also surprised by how young he looked in his old ID card that was tucked inside.

"It brought back memories, oh yeah. I had dark brown hair at the time," the 91-year-old said with a laugh.

Grisham said somebody found the wallet while demolishing some old buildings at McMurdo Station, including the building where he lived from 1967 to 1968.

The worn wallet is a time capsule of the 13 long months Grisham served in the Antarctic -- or "The Ice," as they called it. It held a beer ration card with 21 punches left, his motor vehicle operator's license, and a card with instructions for what to do in the event of a nuclear, chemical or biological attack.

"Thank God it was never used," Grisham said, adding that this was at the heart of the Cold War.

It also had a handwritten recipe for making homemade Kahlua liqueur.

Graham never used that either (he's partial to gin martinis), but a lot of people have asked him for it after hearing his story.

Grisham was particularly busy during summer operations in Antarctica, monitoring the weather and providing reports for the airplanes and ships delivering personnel, equipment, and supplies.

"The entire station worked 12 (hours) on 12 off around the clock for a period of five months because there was so much to do" to get ready for the long, black winter, Grisham said.

There was a two-lane bowling alley, which was almost always in use, along with a small gym because it was too cold to safely exercise outside. 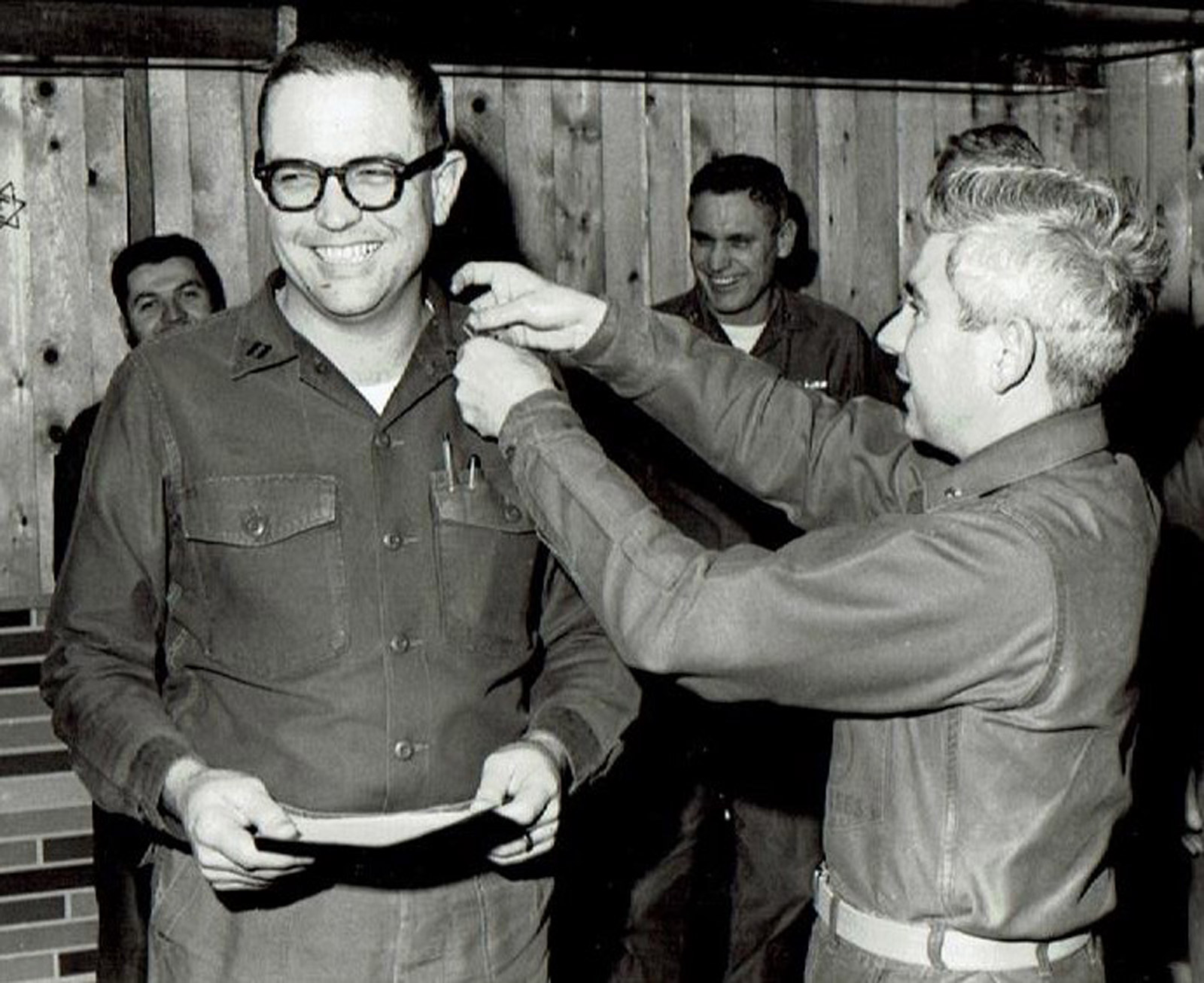 "McMurdo Station was in what we called the 'banana belt,' the temperature got up to about 25 degrees and I've seen it as cold as minus 65," he said. It got even colder as you went farther inland.

"It's almost inconceivable just how cold it is. It's almost impossible to describe to people who haven't been there," he said. "In fact, we spent a lot of time trying to figure out 'how do we explain this to the folks at home?' and we just never really came up with a good way to explain it."

He said it's 50 to 75 degrees colder than the North Pole and if you need a more tangible example, a soda can would freeze and burst open in 14 minutes if you left it outside.

"The one thing that really made life worth living down there was the people that were there," Grisham said. "We wintered 180 men and they were the most congenial, likable men that I ever had the pleasure to be around."

They played a lot of games during their downtime.

Grisham won a lot when they played poker and the wallet had a number of money order receipts from when he sent his winnings to his wife and young children. He was also good at chess but said there was one Russian scientist, who he just couldn't beat.

He said they didn't do much exploring outside the compound because of the extreme cold, but he did get to make the 850 mile trip to the South Pole while he was there.

Grisham also got to meet legendary explorer and mountain climber Sir Edmund Hillary, who picked his brain about the weather for about two hours before setting out on an expedition.

After his tour, he was able to get an assignment in San Diego, California, and later was assigned to an aircraft carrier in Vietnam.

Graham moved back to San Diego after marrying Carole Salazar, who he met in Paris in 2001 after his first wife died. They've been married for almost 18 years.

They said the family has had as much fun with this discovery as he has.

Granddaughter Christina Salazar said she was amazed when she first saw the wallet and thought it looked like he could still use it.

The 26-year-old said she's enjoyed his stories about his time in the Navy since she was a girl.

"Growing up, it was always my favorite to listen to him talk about the Emperor penguins that he would encounter," she said.

Now, she gets to hear about his adventures over one of his famous gin martinis.

"Anytime he has one nowadays, he claims it brings him back to his days on "The Ice," she said. "It's an honor to share a martini with him and listen to him talk endlessly about his time."

She said she learns something new about her grandpa every time he tells a story. 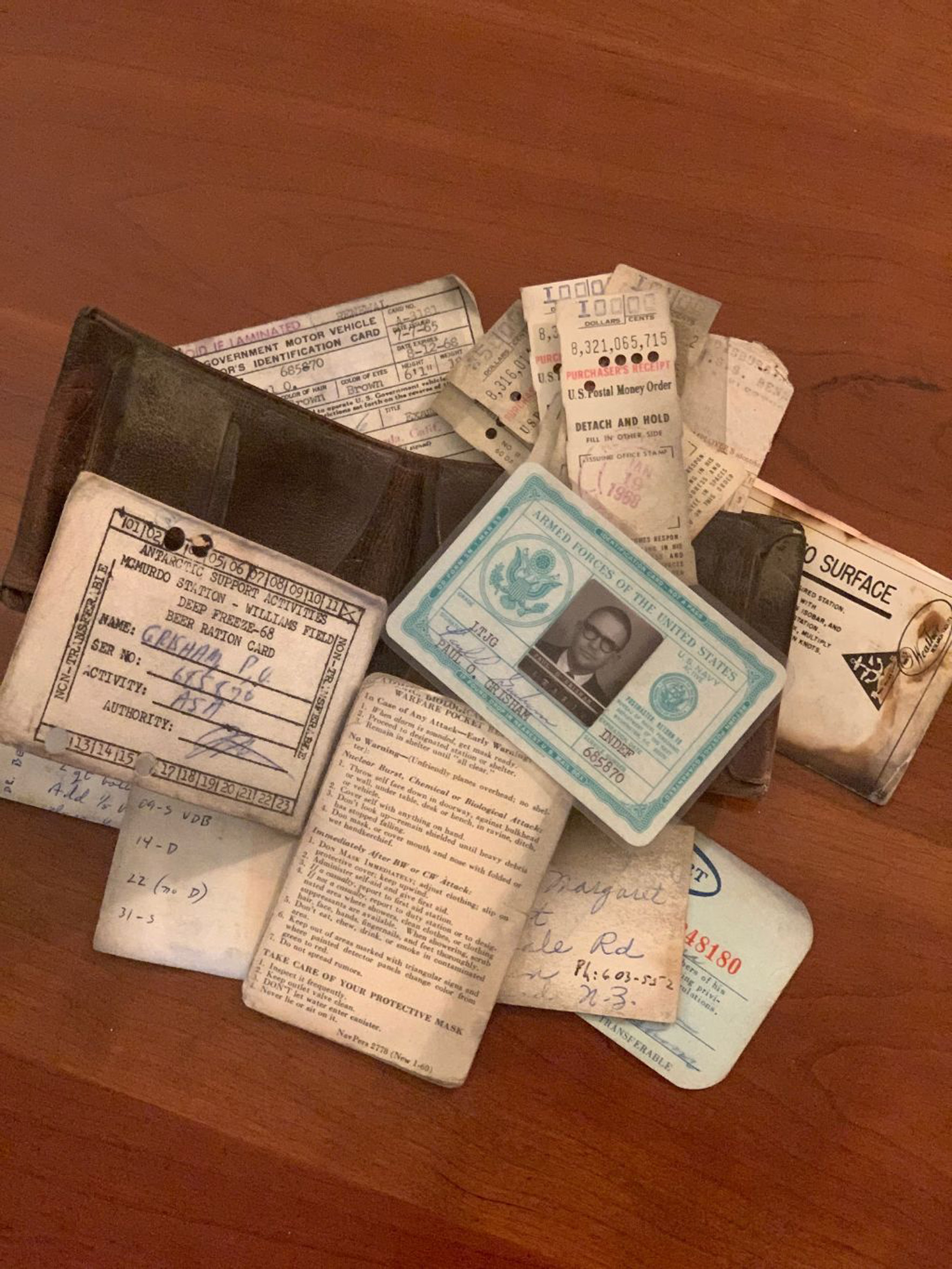