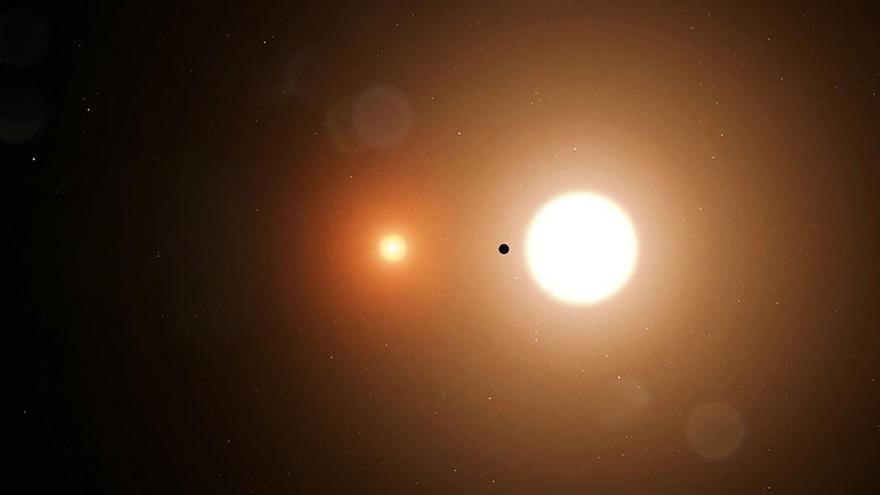 (CNN) -- NASA's planet-hunting TESS mission has discovered multiple intriguing planets since it first began searching the sky in the summer of 2018.

But a high school searching through data gathered by TESS contributed to its latest discovery.

The planet orbiting two suns, like Tatooine in the Star Wars films, is the first of its kind for the TESS mission.

The planet TOI 1338 b was found 1,300 light-years away in the Pictor constellation. It's the only planet in the system with two stars. It's between the sizes of Neptune and Saturn and experiences regular eclipses from its stars.

The stars whirl around each other in orbit every 15 days, with one 10% more massive than our sun and the other is more diminuitive and cooler.

Scarsdale High School student Wolf Cukier was interning for NASA's Goddard Space Flight Center over the summer when he spotted something in TESS' star data.

"I was looking through the data for everything the volunteers had flagged as an eclipsing binary, a system where two stars circle around each other and from our view eclipse each other every orbit," Cukier said. "About three days into my internship, I saw a signal from a system called TOI 1338. At first I thought it was a stellar eclipse, but the timing was wrong. It turned out to be a planet."

The four cameras on TESS study the same patch of sky for 27 days at a time, snapping photos every 30 minutes. This reflects the change in brightness of stars. As planets pass in front of stars, which is called a transit, that can help astronomers determine the location of planets.

But a planet with two stars makes the transit method a little more difficult to spot. TESS could only spot the transit of the planet passing in front of the larger star.

"These are the types of signals that algorithms really struggle with," said Veselin Kostov, a research scientist at the SETI Institute and Goddard. "The human eye is extremely good at finding patterns in data, especially non-periodic patterns like those we see in transits from these systems."

Planets with two suns, especially when one is dimmer like in this system, are harder for TESS to detect. Cukier's contribution of examining the star data and the passes of the planet in front of both stars was key to identifying it.