A mother skipped her own graduation to attend her son's. So his school decided to confer both their degrees 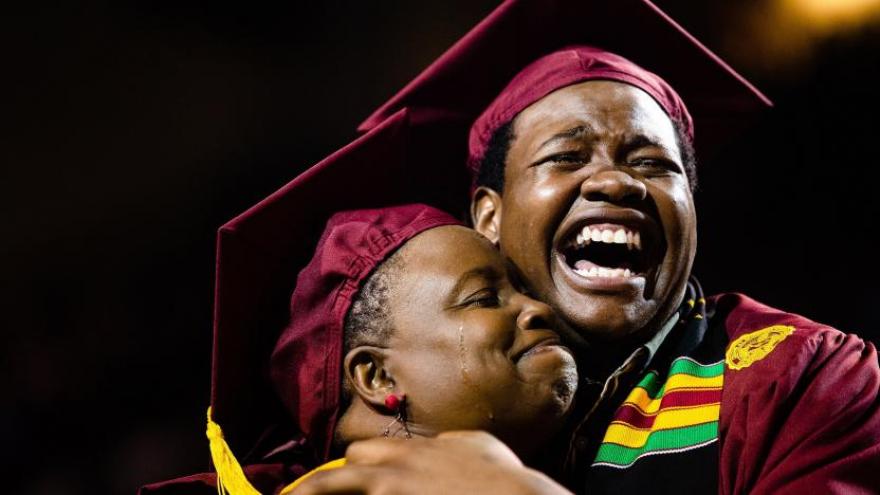 Sharonda Wilson, left, and her son Stephan Wilson both received their diplomas at Central Michigan University's commencement ceremony on Saturday.

(CNN) -- Sharonda Wilson was looking forward to getting her diploma at her graduation from Ferris State University in Big Rapids, Michigan.

There was just one problem: Her son, Stephan, was graduating on the same day at Central Michigan University in Mount Pleasant, Michigan.

Wilson was all set to forgo her own. But her son's school -- and hers -- had a different idea.

In the days leading up to the graduation, Wilson posted her predicament on Facebook.

Among those who saw it was a student who works in the president's office at Central Michigan.

The president then contacted his counterpart at Ferris State University, President David Eisler. Davies wanted to see if his school could confer Wilson's degree.

"It was a very fast turnaround," Ari Harris, the spokesman for Central Michigan, told CNN.

Saturday came. And mom and son both walked across the stage at Central Michigan.

Stephan Wilson, who is part of a musical group on campus, sang during the ceremony. But being able to graduate with his mom made the already monumental day even more memorable.

"I had been looking forward to walking across that stage and accepting my degree for a long, long time," Stephan said in a statement. "Earning my degree was such a huge milestone in my life, and having my mom with me to celebrate that moment was an unbelievable blessing. I am so proud of us both."

Davies, the Central Michigan president, said both Wilsons deserved to be recognized on their special day.

"Sharonda and Stephan both put in the long hours and hard work, and they deserved the chance to celebrate together as a family," Davies said in a statement. "We appreciated the opportunity to partner with our friends at Ferris State to recognize and celebrate this milestone achievement for both Stephan and Sharonda."