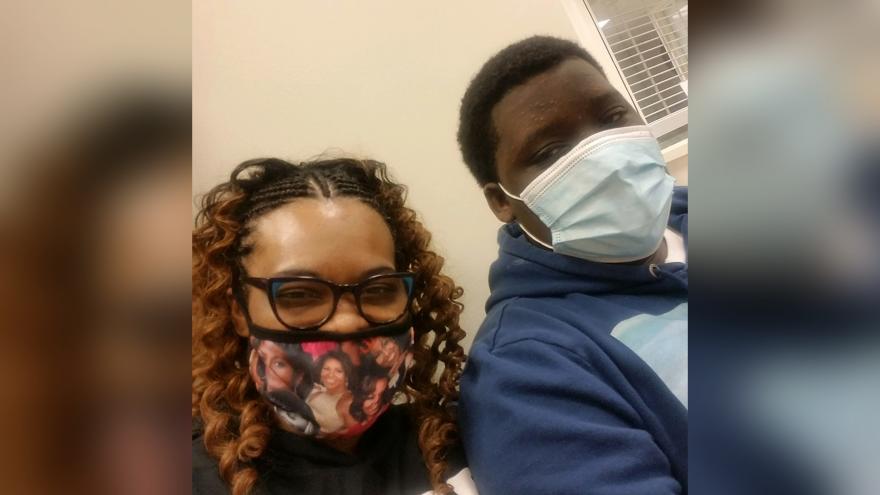 Editor's note: To get more information about bone marrow donation, and to find out how you can help Jehvan and children like him, click here.

For California mom Kimberly Crompton, the painful realization "hit like a ton of bricks."

Breathless, shocked, and overwhelmed, Crompton tells CNN she could not believe what doctors were saying on the other side of the phone.

For over a year, this mom of three has been in a fierce race against time to save her 14-year-old son Jehvan from Chronic Myeloid Leukemia (CML), a rare blood cancer.

Key to Jehvan's fight is a desperately needed bone marrow transplant. Unfortunately, his parents are only half matches. And his siblings in the home match each other, but not their brother Jehvan.

So Crompton is turning to her community for support. She is urging African American people to join the fight to sustain Black life.

"There is a need. Our babies can be cured of sickle-cell, blood cancers and so many other things, but we have to stand up and fight for all of our kids -- not just our own but as a community as a whole."

In an effort to raise awareness about her son and others like him, she held a bone marrow drive last month. To date, Jehvan's story has inspired more than 11,000 registrants to join the bone marrow registry (Crompton only hoped for 200). The list includes Jehvan's extended family across the country.

"Cousins that I never knew about are coming out and getting tested to support," he exclaims.

"They were all trying to hug me and I was confused because I thought they were strangers," he recalls with a laugh. "It meant a lot."

How it all started

It all started with some routine blood tests ahead of foot surgery for Jehvan. The shocked doctors repeated the blood work and confirmed the unfortunate news.

"They felt like it was a mix-up in the lab work," the mother explains.

Up until this point, Crompton says her happy and seemingly healthy son did not experience any obvious discomfort or health challenges hinting that something was wrong.

But in hindsight, with the added lens of a new medical diagnosis, what may have seemed like typical teen behavior may have been symptoms. Crompton recalls times her son said he was tired, but nothing seemed strange or out of the ordinary. It turns out, fatigue is a consistent symptom of CML. As the disease progresses it can be draining.

"I was tired. But then again, I was up really late playing video games and not getting as much sleep as I should have," Jehvan explains.

"Other than that I didn't see anything out of the ordinary," he tells CNN.

After receiving the news, Crompton says her family quickly switched gears and began to focus on Jehvan's health. They drove 2 hours from their home in Bakersfield to Los Angeles for treatment.

It is clear from speaking with Jehvan's dedicated mom, she is not fighting alone. Despite her eldest son's diagnosis, Crompton says she leans into the divine for strength. Days after receiving the news, Crompton prepared for another challenge, delivering it to her son.

"I had a sit-down with him, me and his dad," Crompton shares.

Crompton explains, how helpful it is for her son to think of his journey as a way to champion the lives of other children battling cancer.

"We were chosen for this -- this awful thing of cancer," she tells CNN.

"I told Jehvan 'this is not about us; this is our testimony. We were chosen to go through this journey, and I promise to do everything we can to be OK. But you need to tell your story. You are the vehicle to do that.'"

The race against time

"It was confirmed he was really truly resistant to the medication ... it just wasn't doing anything to help slow down the growth of cancer," the California mom recalls.

A second option meant switching Jehvan to a harsher medication with more severe side effects. One of the needed medications was difficult to access.

"It took me almost a month to get that prescription filled," she says. "Time was just ticking."

Doctors presented a third option which would require a bone marrow transplant.

"I had no clue what a bone marrow transplant involved," she recalls.

As doctors and medical professionals scrambled, Jehvan worried about his parents and what his heavy medical costs could mean for his family. He estimated his transplant would cost 400,000 dollars.

"I couldn't really do anything about it to help out with the price," he tells CNN.

But, Jehvan says, he was assured by his family that his only focus should be on his well-being.

"She (mom) said we have so much support between family and the Be The Match Program, we should have it covered."

After much research, prayer, and tears, the family decided to pursue a bone marrow transplant.

"What we need is someone that is in good health, typically between the ages of 18 and 44," she tells CNN.

Crompton says the type of process that Jehvan needs "doesn't look like surgery for the donor." Jehvan's best match is someone of the same ethnicity.

"The collection process is similar to donating plasma but more involved," Crompton adds.

"If the best match comes through, it will change my life drastically" she explains.

When it's all over

Crompton says her family is hopeful they will find a match. But in the meantime, she is overjoyed that so many stepped up to support children battling cancer.

"I believe this was God's plan. But I have to do my work."

She wishes that her son's story will inspire Black and African American people to support community members battling cancer through education and action.

"Let's get ready, because we are ready -- we don't have to get ready,'" Crompton explains.

Once Jehvan's match is found, Crompton says they are going to "celebrate like never before." After receiving the bone marrow, Jehvan will likely need a year to recover because his immune system will be very weak.

But once strong enough, Crompton says her teen son has sights set on a dream vacation to the Atlantis Resort in the Bahamas.

"Ever since I was little, I think like eight or nine, I always wanted to go to Atlantis," Jehvan says.

"First, I will go to the water park and then the different islands surrounding it," he adds.

"With his second chance at life, we are going to live life on top," Jehvan's mom explains.