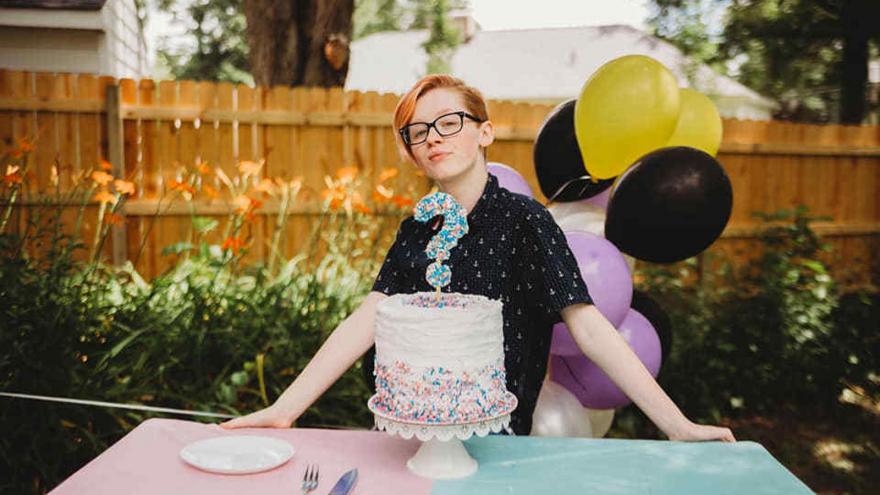 Grey Schoolcraft poses with his cake.

(CNN) -- Love and Brandon Gwaltney's gender reveal party started out like any other.

The couple from Akron, Ohio, wore matching outfits of pink and blue. There was a cake decorated with pink and blue sprinkles and a big question mark on top. And then, of course, there was the big box that typically contains the pink or blue balloons that serve to reveal the gender of their baby.

But as they counted down to one, what popped out were balloons of yellow, white, purple and black -- the colors of the nonbinary flag -- followed by their 17-year-old child, coming out to the world with his new pronouns of he, him and his.

"We wanted to announce that we got it wrong 17 years ago when we told the world we were having a little girl, and named that child McKenzie," Love Gwaltney, the mom, wrote in a Facebook post on Saturday. "So we'd like to introduce you to our SON: Grey."

"I wanted the transgender flag in there because I still feel that going from whatever you are originally to nonbinary is also a transition and it doesn't just have to be straight female to male," Schoolcraft told CNN.

He said it's been a long journey for him to discover his new identity as nonbinary. When he came out to his mom and stepdad a couple months ago, they supported him, but he was nervous other relatives wouldn't feel the same.

Turns out, he had nothing to worry about as the rest of his extended family also took it well and are doing their best to use his correct pronouns, according to Gwaltney.

To have that burden lifted off his shoulders felt "refreshing," the teen said.

"You've been going by one name all your life and to suddenly go by a new name, especially when your parents call you by it, it's weird and has to register in your brain. But it's definitely 100% worth it and I'm glad we had (the reveal party)."

The teen's happiness was captured in heartwarming pictures taken by Sarah Bride Photography, which Gwaltney shared to her Facebook page. After forgetting to make the post private, it blew up, being shared more than 50,000 times and garnering thousands of comments.

"What a world this would be if all parents reacted this way, to their LGBTQ+ Children," one person commented.

Gwaltney said she's been receiving lots of direct messages from people who are sharing their own stories of coming out to their family.

"A lot of people have been reaching out to me through messenger telling me their own stories of coming out to their family," Gwaltney told CNN. "I've even had people ask me for advice, saying 'I think my child might be nonbinary or transgender. How did you know?' Those kinds of questions."

Her best piece of advice for these parents would be to "have an open mind."

"Don't try to put them in a box. Regardless of what stage your kids are in, always support them," said Gwaltney, who is now pregnant with her fourth child.

As for Schoolcraft's advice for others who might be questioning their gender identity or are too scared to come out, he said they should remember that only "you get to make life what you want it to be."

"So no matter what happens, even if someone doesn't accept you, that's not your fault, because you're loved and you're going to find people who will love and support you," Schoolcraft said.