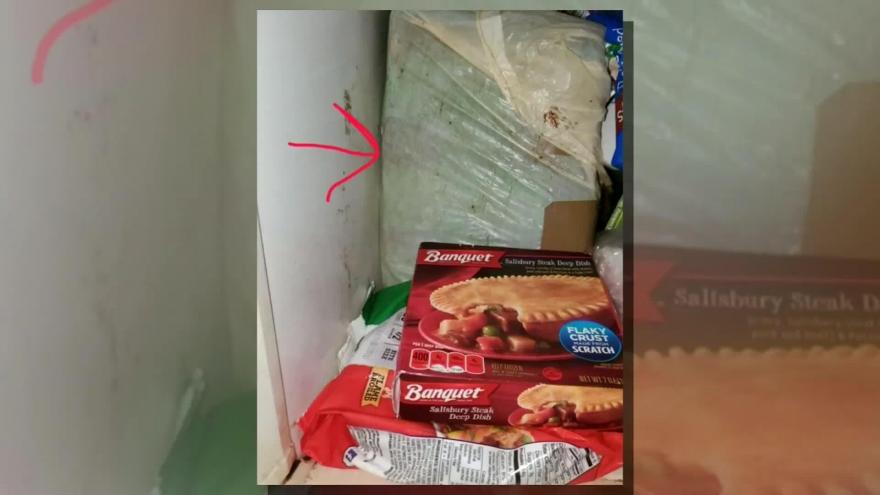 **Embargo: St. Louis, Mo.** Adam Smith said this photo shows the box inside a freezer where he found a dead infant.

He assumed it held a wedding cake topper or another memento that his mother was holding onto and left it at that, he told CNN.

Now that he knows what was really in the box, he said he is struggling to comprehend how she kept it to herself all these years.

St. Louis police said they are investigating the discovery as a "suspicious death" pending an autopsy and asked the public for tips. The St. Louis Medical Examiner's office said the investigation is ongoing and would not share details.

It was "the size of a boot shoe box" and it had been in his mother's freezer for as long as he can recall, he said.

"I remember being curious as a small child. I remember trying to grab a stool and rip through the plastic," Smith told CNN. "Other than that I never touched it."

It traveled with his mother to four different homes in St. Louis, Smith said, including the apartment on Magnolia Avenue where she lived for 25 years until her death.

After she was diagnosed with lung cancer in January, Smith said he moved in with her to help care for her. She died on July 21, he said.

Then, early Sunday morning, Smith said he went into the freezer to get a water bottle and decided to open the box.

He grabbed a kitchen knife and cut through the plastic, then opened the box, he said. He saw a pink fleece baby blanket and reached inside.

Smith said he felt a foot and little toes. The blanket unraveled a little bit, and he said he saw a baby foot.

As he tucked the fleece back inside, he saw the hair of the infant, he said.

"The baby looked clean. There was no blood on it, looked like a newborn baby," Smith recalled. "From what I could see the skin and everything was intact."

Smith said he immediately called police, who arrived within minutes.

Now, Smith has even more questions and theories about who the baby may have been. Memories from long ago are taking on new meaning, like the time his mom was upset when he was seven or eight years old, he said.

"All she told me was 'my first born Jennifer would have been 21 years old today,'" Smith said.

He believes the infant in the freezer could be Jennifer; if so, that would mean the infant died about 50 years ago.

"Who absolutely keeps their own child in a box with this long and never talks about it?" he said to CNN affiliate KTVI.

"I just have so many thoughts. It's insane."