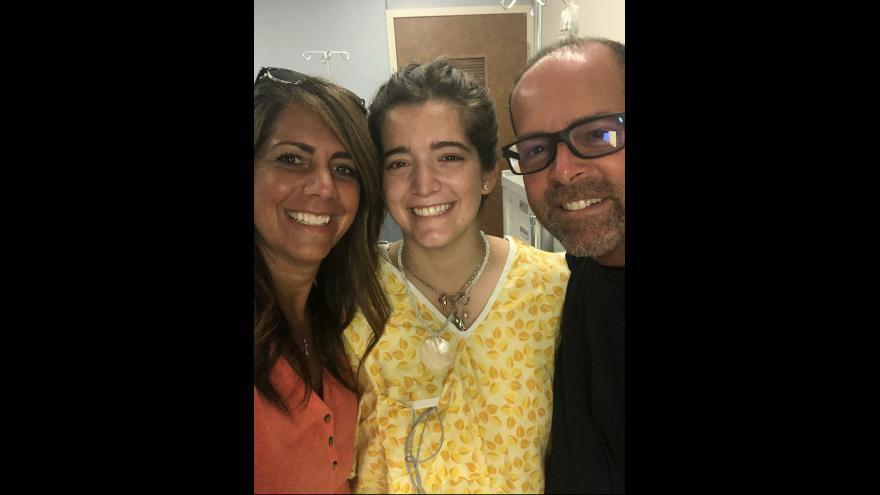 Gia Fuda, center, with her parents Kristen and Bob.

(CNN) -- A Washington teenager that disappeared for nine days was found alive in the woods over the weekend, her mother and authorities confirmed to CNN.

Gia Fuda, 18, was found on Saturday off of Highway 2, east of the town of Skykomish, which is a town about a 70-mile drive east of Seattle, according to the King County Sheriff's Office (KCSO).

Her mother, Kristin Fuda, told CNN she last saw her daughter on the morning of July 24. When Gia didn't respond to text messages and phone calls that evening, her parents filed a missing persons report with KCSO.

Gia was also captured in surveillance camera footage from a coffee shop near the town of Index on the morning of July 24. Authorities were eventually able to locate her car nearby, where they discovered that her car had run out of gas.

KCSO Major Crimes Detectives called Fuda's disappearance suspicious on July 27 after authorities found her vehicle with her purse inside.

Search and rescue teams from around the state assisted with the search, the Sheriff's office said during a news conference. The area is considered a dead zone, which made it difficult to try and track Gia via her cell phone.

"She said she ran out of gas and just pulled over real quick and locked the door," Kristin Fuda told CNN affiliate KOMO. "She was trying to find a bridge to go over in Skykomish but she was on the wrong side of the road. She thought she could hike up and find a bridge and, yeah, that didn't work out."

On August 1, search and rescue teams found some of Fuda's items such as her shoes, bible, bag and cellphone, her mother confirmed to CNN. Shortly after, they found Fuda nearby in a creek.

"She only thought she was up there for three days," Kristen Fuda told KOMO. "She didn't realize how long it had been."

Gia hunkered down into bushes and curled up at night to try and get sleep, but shook as she was cold at night, her mother said. She survived off of nothing but berries and water from a nearby creek.

The teenager was taken to a local hospital, where she was treated for scratches, cuts and dehydration. She is still trying to process everything that happened, her mother said.

Gia's recovery is going well, her mother said, but she is not yet sure when she will be released from the hospital.