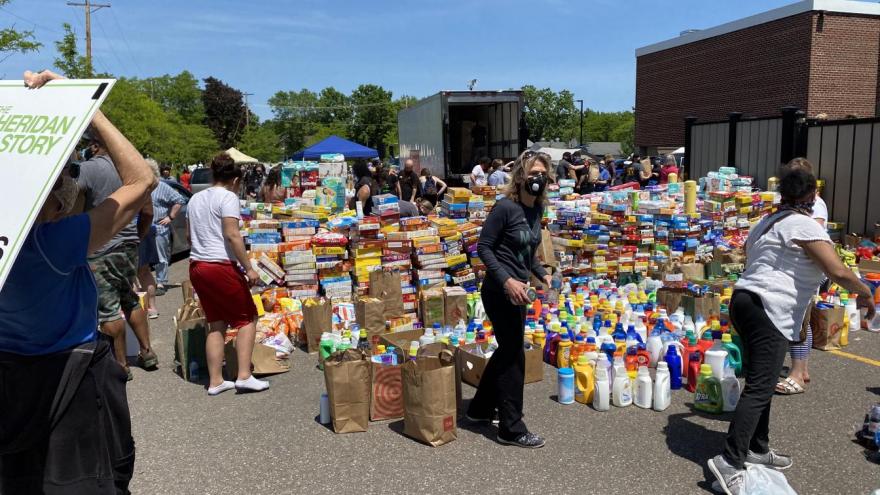 Volunteers sort donated groceries and supplies for families who live in the areas damaged by looting and protests.

(CNN) -- A food drive at a middle school in Minneapolis was overwhelmed by the amount of donated groceries and supplies.

"Donations covered every inch of ground of our parking lot, the grass, everywhere," Sanford Middle School Principal Amy Nelson told CNN of Sunday's drive. "We had to also use a neighboring park because we didn't have enough space here at the school to stack it up."

Parents and faculty wanted to help the families who lived in the areas impacted by the protests following last week's death of George Floyd while in police custody.

Hundreds of businesses in Minneapolis and St. Paul have been damaged and are closed, including grocery stores.

"The food locations and the pharmacies near the third precinct were damaged, creating a food desert for some of the families in our student body," Nelson said. "There are no places within walking distance for them to go and buy food."

An appeal went out on social media, listing groceries the food drive's organizers thought would be most needed.

Nelson said they initially hoped for around 100 grocery bags.

"We still don't know how much we received. It was so much more than we needed and it just kept going up." Nelson told CNN. "The line of cars bringing donations went for blocks and blocks in every direction from the school. And they just kept coming."

The social media appeal for groceries was shared well beyond the schools' families, and Nelson said some of the people donating came from out of state.

While donations exceeded expectations, so, too, did the need for help; hundreds of families came seeking groceries.

"The need was much greater than we anticipated, and we opened it up to anyone who needed help," Nelson said. "Families were so grateful to get the supplies they needed. Tears of joy and gratitude."

A number of parents and students volunteered to sort and hand out donations. They also received help from The Sheridan Story, a local food-support non-profit. When the food drive ended Sunday night due to the curfew, the volunteers were still sorting tons of groceries.

The remaining food went to the Sheridan Story, which will distribute it to the community.

For Nelson, it was an overwhelming experience.

"First with the pandemic, just to see some of my students and parents, and then to see them come together to do such good, it was just so heartwarming in such a way."