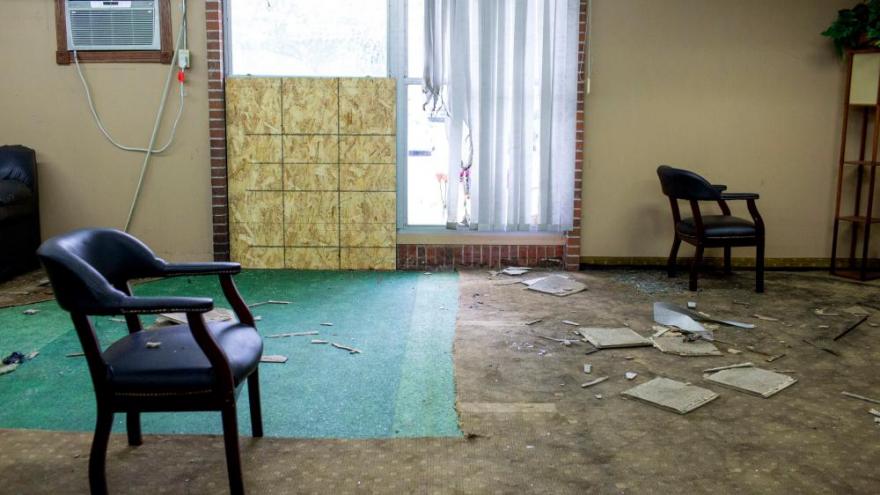 Michael Hari was convicted on hate crime charges for his role in the bombing of the Dar Al Farooq Islamic Center, seen here after the attack, in 2017.

(CNN) -- The founder of a terrorist militia -- also a former Illinois sheriff's deputy -- was found guilty on hate crime charges for bombing a Minnesota mosque in 2017.

A federal jury convicted Michael Hari this week for his role in the bombing of Dar al-Farooq Islamic Center in Bloomington, Minnesota.

He faces a minimum of 35 years in prison, the US Attorney's Office in the District of Minnesota said in a statement.

The bombing, prosecutors say, was an act of hate against Muslims.

"Hari targeted DAF to terrorize Muslims into believing they are not welcome in the United States and should leave the country," the US attorney's office in Minnesota said.

In summer 2017, Hari founded a terrorist militia group called the "White Rabbits," which called on members to take up "armed resistance" against the Illinois government, according to nonprofit investigative newsroom Reveal. He outfitted members of the group with paramilitary equipment and assault rifles, prosecutors said.

In August 2017, he and two co-conspirators, both of whom pleaded guilty in 2019, drove in a rented pickup truck from Illinois to Minnesota to bomb the Islamic center.

When they arrived, Hari told one of the two men with him to use a sledgehammer to break a window at Dar al-Farooq and throw a plastic container that contained diesel fuel and gasoline into the building. Hari told the other man to light the fuse on a 20-pound black powder pipe bomb and throw it through the broken window. The three men then left the scene before the pipe bomb exploded, damaging the building and igniting the gasoline and diesel mixture that started a fire.

Several people were at the center's mosque for morning prayers at the time of the bombing, the district office said, though Bloomington authorities said at the time that no one was injured.

Hari was convicted on all five counts, including intentionally damaging religious property because of its religious character, obstructing the free exercise of religious beliefs by use of force, conspiracy to commit federal felonies with fire and explosives, using a destructive device to commit a violent crime and possessing an unregistered destructive device. His sentencing date has not been scheduled.

Hari previously served as a sheriff's deputy in Ford County, Illinois, for 18 months, the Ford County Record reported in 2019.

CNN has reached out to attorneys for Hari and is waiting to hear back.