A middle schooler was insecure about his haircut. So his principal fixed it himself instead of disciplining the boy for wearing a hat 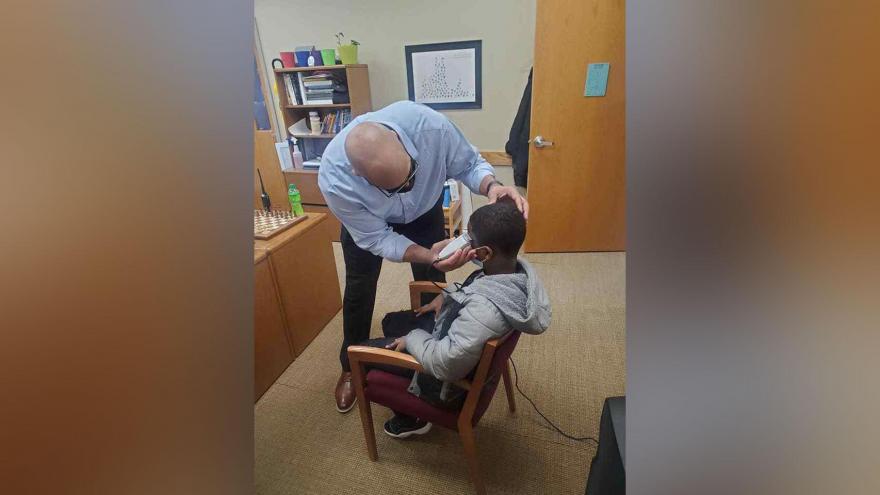 Jason Smith, the principal at an Indiana middle school, touching up a student's hair.

(CNN) -- We've all had at least one bad haircut in our lifetimes, and chances are, we remember how that bad haircut made us feel.

Jason Smith, the middle school principal at Stonybrook Intermediate and Middle School in Indianapolis, Indiana, understood that feeling. And that's why it was a no-brainer to jump into action for one of his students, Anthony Moore.

Moore was wearing a hat, which is against the school's dress code. After the student spoke with a school dean for about 30 minutes, Smith was asked to step in.

"I sat across from him and asked, 'What's wrong? Why are you being defiant, why are you refusing to take your hat off? It's a pretty simple request,'" Smith said. "And he explained that his parents took him to get a haircut and he didn't like the results."

Smith said he and the dean thought his hair looked fine. "But you know he's a 13 [or] 14-year-old kid, and we know social acceptance is more important than adult acceptance," he said.

"I told him, 'Look, I've been cutting hair since I was your age,' and I showed him pictures of my son's haircuts that I did and some of me cutting hair in college. And I said, 'If I run home and get my clippers and fix your line, will you go back to class?'" Smith said. "He hesitated but then he said yes."

So in the snow, Smith drove back home to get his clippers and brought them to his office to line Moore's head up while his parents were called for consent to touch up his hair.

"He (Smith) handled it very well to keep him from getting in trouble at school," she said. "I'm just glad that he was able to handle that without ... being put in in-school suspension."

"He didn't say straight out, but I feel like he didn't want to be laughed at," Smith said. "The barbershop and hair cuts as Black males is very important in the community and looking your best and being sharp -- it's just a cultural aspect."

"Just from my being a Black male myself and coming through that culture and you know, I really think girls matter at that age, which [means] appearance then could matter. He was scared he was going to be laughed at and we were pretty sure no one would notice, but he was looking through his lens," Smith said.

Smith made sure to check on Moore throughout the day, and found that he was learning and didn't have his hat on after the touch-up.

"All behavior is communication and when a student is struggling, we need to ask ourselves what happened to this child instead of what's wrong with the child," Smith said. "What need is the child trying to get met and really, the future of urban education rests on that question."

Smith said the consequence for not abiding by the dress code ordinarily would have been in-school suspension or being picked up by a parent, which, Smith said, "would have prevented him from being in front of a classroom teacher and giving him the education he deserves, so it really worked out well."