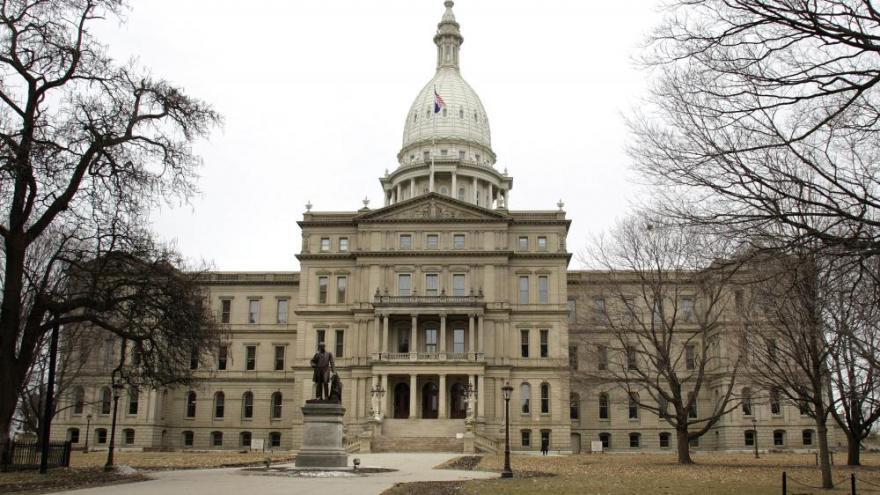 A Michigan state senator apologized Wednesday after a female reporter said he remarked a day earlier that male high school students could "have a lot of fun" with her -- a comment she believes was intended to intimidate.

(CNN) -- A Michigan state senator apologized Wednesday after a female reporter said he remarked a day earlier that male high school students could "have a lot of fun" with her -- a comment she believes was intended to intimidate.

Republican Senate Majority Whip Peter Lucido issued the apology after the reporter, Allison Donahue of the Michigan Advance, published a firsthand account of the Tuesday exchange at the state Capitol.

According to her account, Donahue had approached Lucido to ask him a question in the process of reporting when the senator, who was standing in front of a group of boys from his high school alma mater, told her he would speak with her "after he was finished honoring the group of students."

"As I turned to walk away, (Lucido) asked, 'You've heard of De La Salle, right?'" Donahue wrote, referring to the private, all-boys Catholic school in the state. "I told him I hadn't."

Donahue wrote that the boys "burst into an Old Boys' Network-type of laughter" as she walked away, adding she felt she'd "been the punchline of their 'locker room' talk."

Donahue noted in her firsthand account that at 22 years old, she's among the youngest reporters at the state capitol, the senator, she noted, is among leadership.

His comments made her feel "small," she wrote, adding: "It made me want to walk away from the Capitol and tell my editor that Lucido wasn't available for comment."

Instead, she later confronted the senator about his "unprofessional" comments, but said that he cut her off and said "it was nothing personal and this is just how he talks to young women." Donahue said he continued to explain himself by saying he'd made similar comments to an all girls' school the week prior.

Lucido apologized Wednesday in a statement posted to his official social media accounts. "I apologize for the misunderstanding yesterday and for offending Allison Donahue," he wrote.

He has not responded to requests for comment from CNN.

But later on Wednesday, Lucido told reporters including CNN affiliate WDIV that Donahue's account of their interaction was "not accurate."

"I said, 'We're going on the floor to have some fun. You're welcome to join us.' This thing about what she interpreted, sexually or otherwise, it's unfortunate. It's really is. Truly unfortunate," he said.

Lucido added that "it doesn't matter how she took" his comments, it's how "she wanted to take it. Not how I did."

Donahue told CNN on Wednesday that the senator's comments, which she called a "sexual innuendo," were meant to intimidate her into not doing her job.

"To me, as much as it was embarrassing and it was belittling and it was sexist, I also saw it as a scare tactic to get me to leave with my tail between my legs and leave without asking the questions I was there to ask," she said in a phone interview.

Donahue said other reporters had contacted her to share similar comments they had faced in their careers.

"The fact that people across the country are relating to this -- that breaks my heart," she said.

"He had an opportunity to bring in teen boys from a Catholic school ... and instead of showing them what a senator in our state is he showed them ... pathetic behavior," he said in a phone interview on Wednesday.

Asked if Lucido should resign over the alleged comments, Ananich said, "I hope his character is what's improved upon. I think that's much more important than him leaving this role."