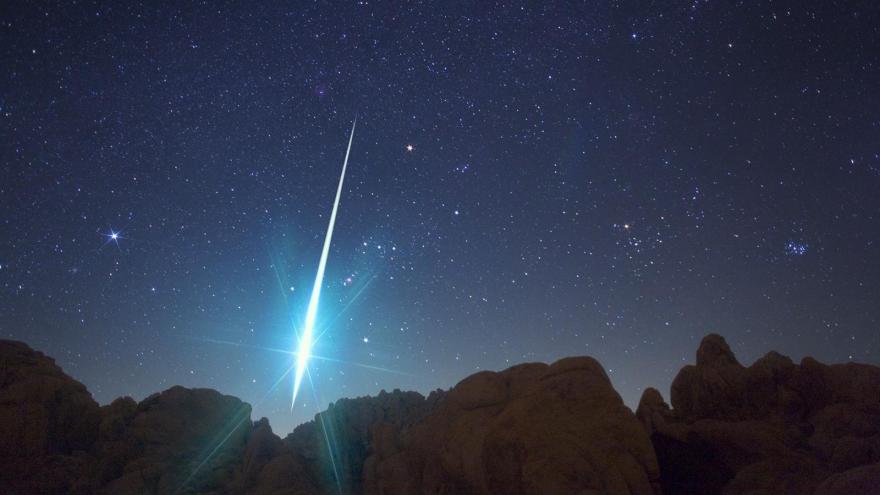 A meteor spotted during the annual Geminid meteor shower on December 14, 2009. According to NASA, a "fireball" is an exceptionally bright meteor that can be seen over a large distance. Full Credit: Wally Pacholka/Barcroft Media/Getty Images

(CNN) -- While you were living your life on December 18th, 2018, a giant space rock exploded 16 miles above the Earth's surface, giving off 10 times the energy of the atomic bomb detonated over Hiroshima. No big deal.

The event is properly called a "fireball," NASA's term for "exceptionally bright meteors that are spectacular enough to to be seen over a very wide area."

With an impact energy of 173 kilotons, December's fireball was the second-most powerful to enter Earth's atmosphere in 30 years. You may recall the first -- it was that huge, blinding fireball that rocked parts of Russia in 2013.

This may sound catastrophic, but images being shared of December's fireball are actually quite poetic in scale. This atomic, otherworldly force appears as a simple red blip above the clouds.

But you likely didn't know about it until now, because scientists only just noticed it. That's because the area where the fireball exploded, over the Bering Sea, is extremely remote.

CNN has reached out to NASA for additional comment.

In case you're not uneasy enough about the reality that flaming extraterrestrial objects are continuously pelting our fragile planet, they do so with alarming regularity.

NASA keeps track of most of the notable fireballs and bolides (a similar astronomical term) that reach Earth. So far in 2019, there have already been five notable fireball events. Don't worry, though! Most are super tiny.

And if the big one ever comes along to make dinosaurs of us all, NASA's Planetary Defense Office has our backs.

Correction: This story has been updated to reflect that the fireball had an impact energy of 173 kilotons.