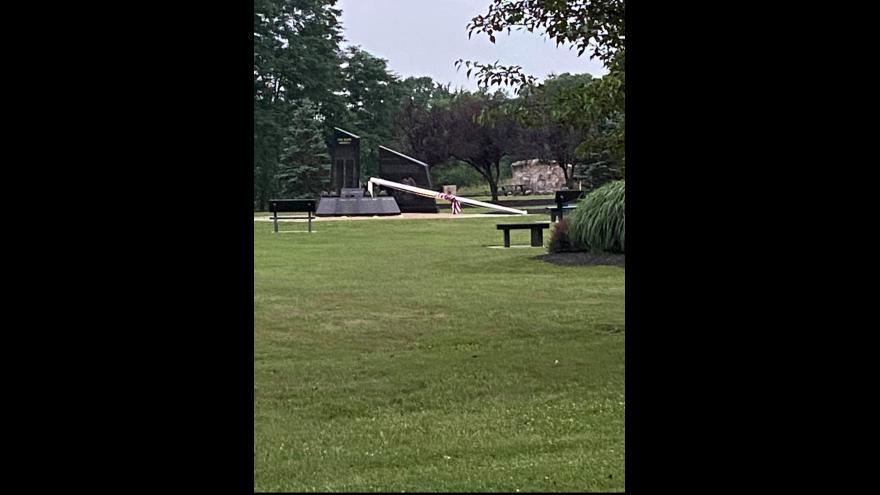 A flagpole at a 9/11 memorial in a New York village was vandalized, police said.

(CNN) -- A memorial dedicated to five firefighters who died in the September 11 terrorist attacks has been vandalized in a New York village.

A flagpole at the 9/11 memorial in Washingtonville, a bit over an hour away from One World Trade Center in downtown Manhattan, was "intentionally damaged," Washingtonville police said this week.

The flagpole appeared to be cut down with a saw, and parts of the pole were covered in graffiti, Washingtonville Mayor Joseph Bucco said in a statement on Facebook.

A sign belonging to a nearby church also was damaged, Bucco said, and an eagle model that used to sit at the 9/11 memorial was found at the church. Police said the incidents are related.

The police "will not leave any stone unturned" to locate those responsible, Bucco said.

The memorial was erected to honor five firefighters, all residents of Washingtonville, who died during the attack on the World Trade Center. It was completed in September 2002, according to the Times Herald-Record. Their names are engraved into black granite below busts of their fire helmets.

Bucco told CNN affiliate News 12 Westchester that the village is offering a $5,500 reward to find who's responsible. Officials also will install cameras in the park where the memorial sits to prevent future vandalism.

CNN has reached out to the mayor's office and the police department for comment and is waiting to hear back.