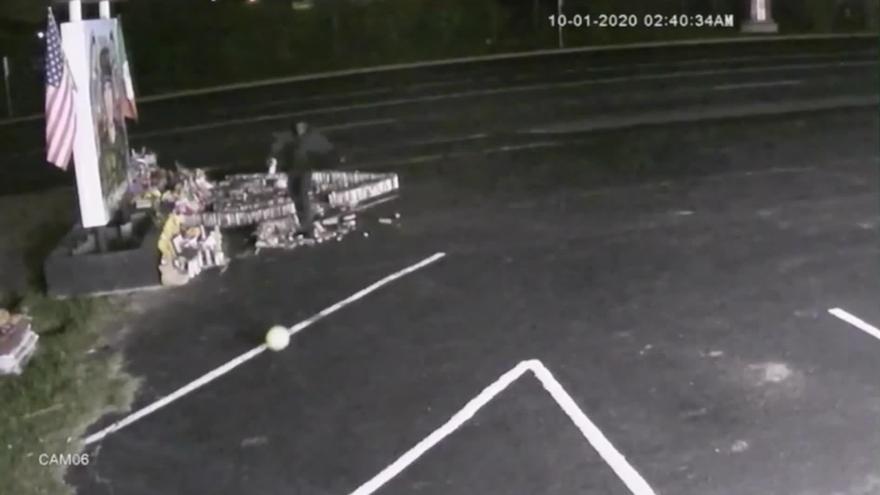 A person dressed in all dark clothing can be seen running through the memorial located in the parking lot of a tattoo parlor outside Fort Hood's East Gate in Killeen, Texas. The person kicks the candles, flowers and memorabilia left to remember Guillen. The footage was provided by Sick Made Tattoo Parlor, according to LULAC.

The Killeen Police Department told CNN the department was not aware of a response to the incident.

The defacement of the memorial took place in the early morning of October 1, just hours after the day that would have been Guillen's 21st birthday.

Part of the memorial was a mural painted by artist Cherine Mendoza in early July so that soldiers could see and remember Guillen's face each time they left through fort's East Gate, LULAC social media director Carlos Martinez told CNN.

The organization is asking the public to help provide information that leads to the arrest and conviction of the person caught on camera defacing the site, LULAC said in the Facebook post.

Guillen, 20, vanished in April and her remains were discovered June 30 in a shallow grave, according to family attorney Natalie Khawam. She was bludgeoned to death and her body was moved from the military base by her killer, said Khawam, who cited details the family learned from Army investigators.

Officials named the main suspect in Guillen's disappearance as Spc. Aaron David Robinson. According to US Army Criminal Investigation Command, the 20-year-old suspect killed himself on July 1, after police confronted him in Killeen.

According to Khawam, Guillen's family said she planned to file a harassment complaint against Robinson the day after she was killed, and they believe Robinson became enraged when she told him.

Previously, Fort Hood officials said they were unaware of reports of sexual harassment involving Robinson, but there is an ongoing investigation, according to the Army.

"I would ask that we focus on reminding the community that the mural is there to bring the community together and bring awareness to sexual assault, sexual harassment and its prevention," said Analuisa Tapia, LULAC district director, in a press release.

"Our community has already been damaged by the loss of one too many soldiers. We ask that we collectively take care of the mural as we honor our service members who live in that silent combat."

On September 16, a bipartisan bill named the "I Am Vanessa Guillen Act" was introduced by a group of US House lawmakers in memory of Guillen. According to the bill's sponsors, the act would make sexual harassment a crime within the Uniform Code of Military Justice and move prosecution decisions of sexual assault and harassment cases out of the military chain of command.