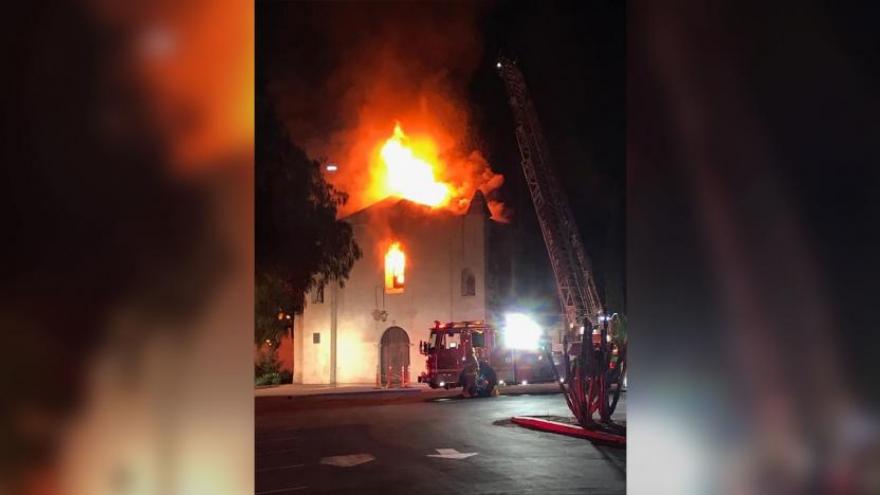 The San Gabriel Mission on fire.

(CNN) -- California firefighters are investigating the origin of a fire that destroyed a historic 249-year-old Catholic church.

In the early morning hours Saturday, firefighters responded to a fire at the San Gabriel Mission where they found a massive blaze engulfing the roof and front entrance of the church, San Gabriel Fire Department fire captain Antonio Negrete told CNN. The church sits about 11 miles northeast of Los Angeles.

When firefighters made a forced entry into the church in an attempt to put out the blaze, portions of the roof and ceiling began to fall, he said.

"During the initial stages of the fire attack, firefighters were able to remove historical artifacts and some artwork from the path of the blaze," fire chief Steven Wallace told CNN. "Once the heavy fire in the roof was knocked down, firefighters re-entered the old church and made a valiant stand to cut off the horizontal spread of the fire near the altar area, sparing items that date back to the late 1700s."

The attached Mission Museum was also saved from the fire. The building sustained heavy damage to the roof, with considerable smoke and water damage to the sanctuary area, according to Wallace.

No one was inside the church at the time of the fire and no firefighters were injured putting out the blaze.

Investigating the cause of the fire

The church was undergoing renovations to mark its upcoming 250th anniversary celebration when the fire broke out.

"We are so grateful and moved by the tremendous show of support from our Mission community during this tragic time. We thank the amazing efforts of our San Gabriel fire department and all the supporting cities that assisted in the fire," San Gabriel Mission said in an Instagram post Sunday.

"Their unwavering efforts to stop the fire saved our altar. Thank you to our Mission family that came to cry and pray alongside us yesterday ... you have given us renewed and rekindled strength to rebuild and come back to celebrate our restoration."

The church has been at the center of a controversy surrounding statues of St. Junipero Serra -- seen as symbols of violence and oppression to indigenous populations -- which have been toppled by activists across California.

"One of the factors investigators are taking into account is the recent vandalism to the statues of the saint, specifically in the Los Angeles region," Negrete said.

Serra, a Spanish priest, initiated the building of missions that line California and remain a top tourist attraction. However, when the Spanish armies and Catholic missionaries came to take the West, they imposed their religion on indigenous people and decimated the native population several times over.

Following the toppling of Serra statues across California, the San Gabriel Mission relocated their bronze statue of Serra, which stood outside the church entrance since the 1980s,"to a more appropriate location, out of public view," they announced before the fire.

Other churches in the greater Los Angeles area that have also had incidents and any possible connection between incidents will be examined as part of the investigation, according to Wallace, the fire chief.