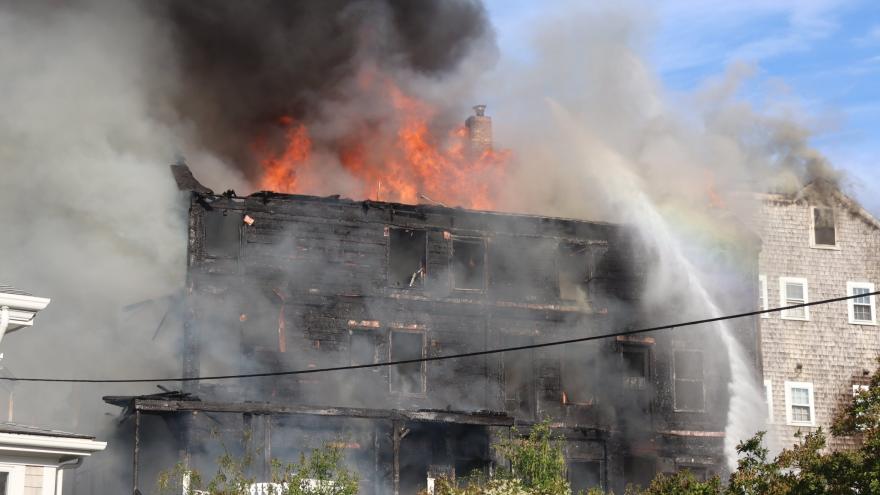 (CNN) -- Massachusetts firefighters battled a large blaze Saturday that was first reported at a hotel on Nantucket Island.

Authorities received a report about a fire at the Veranda House hotel just after 6:45 a.m. Saturday, at which time an off-duty captain and several people ran to the scene to help evacuate guests from the hotel, the Nantucket Fire Department said in a news release.

"The actions of the citizens and the Captain saved lives," the department said.

In a Facebook post, the hotel confirmed all employees and guests were safely evacuated and accounted for.

But the flames raged on and spread to several other buildings, with "extensive fire" developing in at least two of the structures despite firefighters' efforts to keep the blaze contained, the fire department said.

"Fire was unable to be contained to the building involved and has spread to several surrounding buildings," the department said in its news release. "Damage to the structures involved is extensive with several of the buildings being total losses."

No injuries were reported to civilians but two firefighters were transported from the scene for possible heat exhaustion and a third for a back injury, the department said.

Firefighters were still on the scene at 2:30 p.m. and were expected to remain "for an extended period," the department said. In a statement, police asked people to avoid the area.

Videos shared on social media Saturday showed the historic hotel going up in flames. The Veranda House, a 17th-century building, was completely renovated in 2020, according to the Nantucket Resort Collection website.

The 18-room boutique hotel offers a "unique mix of sophisticated flair and laid-back luxury" with harbor views, according to the site.

The fire department released a statement on Sunday, thanking Nantucket and Cape Cod firefighters who "without a doubt prevented a massive fire from spreading and causing even more of a loss."

"All firefighters and first responders worked selflessly and diligently together to knock down the fire and keep it contained," the statement said."

The department also thanked local businesses, restaurants and private citizens who "showed an outpouring support for the victims and first responders" and helped set up a coffee cart station with water, drinks and food.