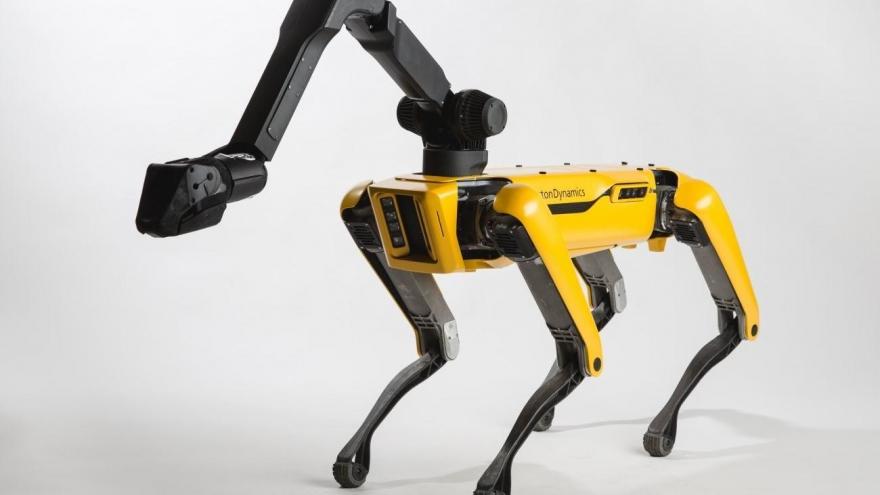 Using robots in dangerous police situations is common these days, but one police department has been quietly testing a special robot that looks like a dog.

(CNN) -- Using robots in dangerous police situations is common these days, but one police department has been quietly testing a special robot that looks like a dog.

Massachusetts State Police became the first law enforcement agency to use a robot dog named Spot. Boston Dynamics launched the four-legged robot in September, and it worked with state police to see what happened when you take Spot out of the lab and put him in the real world.

One robot joined the police department's bomb squad for 90 days to see how Spot would function in a situation where there are bombs and hazardous materials or dangerous suspects, according to Massachusetts State Police. The idea is that Spot would approach the object and inspect it so that humans don't have to be endangered.

The problem for some people is that no one knew much about it and there aren't any regulations around using the technology. That is, not until the American Civil Liberties Union of Massachusetts found out about it.

Boston Dynamics let the state police test out the robotic dog from August 7 to November 5, according to the lease agreement obtained by the Massachusetts branch of the ACLU in a records request. The ACLU received the documents and made them public this week.

"We need to have transparency and safeguards to ensure that law keeps pace with technology and technological innovations. This kind of technology shouldn't be deployed in secret," said Carol Rose, executive director of the American Civil Liberties Union of Massachusetts.

"We need to have a robust public debate so we can set the protections and the boundaries where we can ensure that technology is used to enhance liberty and not to take it away," she said.

The ACLU of Massachusetts fears what may happen if rules aren't set in place about how Spot the robot can be used. Hazardous situations make sense, but the organization worries about other situations, Rose said.

"A lot of technology often can exacerbate racial disparities, particularly when it's used in some neighborhoods that are highly policed, but not in other neighborhoods for example," Rose said.

She also mentioned when something like this happened at a point in US history.

"During the Civil Rights Movement, dogs were turned against civilians in ways that really violated people's basic civil rights and civil liberties for things like the freedom of association, freedom to dissent and to protest and to gather without fearing that you might be tracked by a robotic dog," she said.

While robotic dogs scaring people would be frightening, the lease agreement specifically talks about evaluating Spot's capabilities in inspecting dangerous situations that may involve suspects or devices.

"Massachusetts State Police have used robots to assist in responses to hazardous situations for many years, deploying them to examine suspicious items and to clear high-risk locations where armed suspects may be present," Procopio said in a statement. "As part of our continual emphasis on examining the application of new technologies to our mission, we recently completed a test program of the Boston Dynamics robot known as 'Spot.'"

His statement did not address whether there are current regulations on robotics.

For Boston Dynamics, putting Spot on the police force was really about seeing how the robot dog can help law enforcement in public safety.

"What we're targeting in this space is public safety at large, which includes any first-responder type applications," Michael Perry, Boston Dynamics' vice president of business development, told CNN. "That's primarily getting initial assessments of a hazardous environment, whether it's a fire, hazmat or a potential bomb threat, before you have to send in people."

Law enforcement isn't the only area Spot has been working in to see how the robot can help. The oil and gas industries, construction, as well as hazardous chemical environments, are situations that could benefit.

"In an oil and gas site, you have to send people into potentially explosive or noxious environments that can make them sick or potentially kill them," Perry said. "If you had a robot attached that is capable of carrying various sensors to detect those problems, you wouldn't have to expose a person to risk in that space."

There are robots that already do this type of remote investigating, but their mobility isn't as nimble as Spot's, he said. Many of these robots are on wheels or tracks that can't handle all types of terrain. Stairs, curbs and rough ground may present obstacles to the robots doing their jobs.

One thing the company wants to make clear is that Spot shouldn't be used to physically harm people or intimidate them. Perry said the company has been clear with customers and included this in user guides.

How the public decides to regulate Spot and any robots, isn't a business Boston Dynamics wants to get into. It's up to the community, Perry said.

"I think that's a matter for the community to come together and figure out exactly how they want the technology to be deployed," he said. "It's going to be incumbent on communities, lawmakers and law enforcement to come together and talk about what are some standards for them."