A Maryland police department won't display a handmade American flag with a blue line. The governor says it should 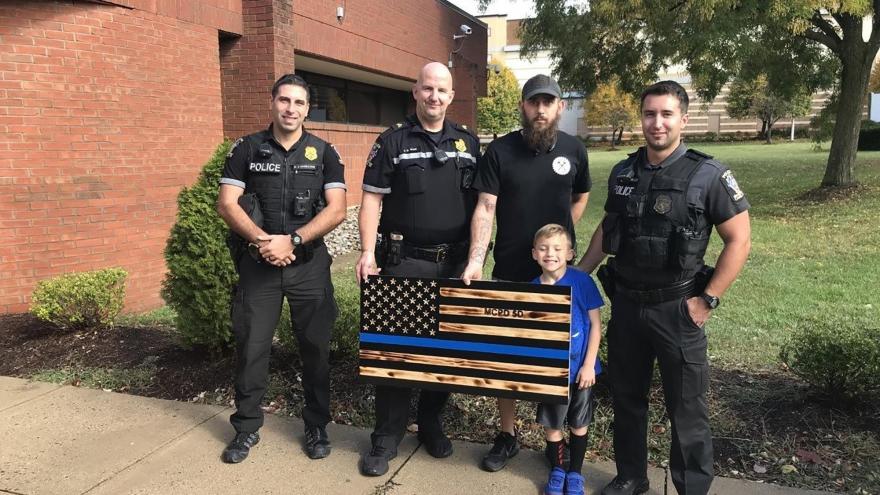 Montgomery County police officers with resident James Shelton and his son, who made the flag for National First Responders Day.

(CNN) -- A Maryland police department is stuck in the middle of a heated debate between a local official and the state's governor over a wooden American flag with a thin blue line given to them by a resident.

The department announced last week it would be displaying the flag in its 5th District Station.

Less than a day later, the department posted on social media a note from Montgomery County Executive Marc Elrich, who said the flag may be a symbol of support to some but "it is a symbol of dismissiveness to others."

"Because it is divisive, the flag will not be posted at the 5th District nor in any public space within the Police Department," the note said. "Under my administration, we are committed to improving police relations with the community and will immediately address any action that stands against our mission."

In a series of tweets, the state's governor fired back.

"I'm offended and disgusted that County Executive Marc Elrich has prohibited Montgomery County Police officers from displaying a 'thin blue line' American flag that was made for them by a father & his young son in honor of National First Responders Day," Gov. Larry Hogan said.

He called Elrich's move "disgraceful" in his tweets, and called on the official to reverse his decision and apologize to the department and residents.

"I have attended the funerals of fallen law enforcement officers across our state, and I take time to thank them every day for their dedicated service and sacrifice," he said. "We proudly hang this very same American flag in Government House in their honor. To outlaw these American flags from being hung in county buildings by law enforcement officers is outrageous and unconscionable."

After the governor's statements, Elrich stood by his decision, saying "What if I ordered police departments to fly the Black Lives Matter flag? You think that would go over very well with everybody? Probably not."

Elrich told reporters Monday the governor should instead focus on other issues.

"I wouldn't talk to him about this, it's a waste of time. He shouldn't be mucking in it."

It's not the first time the flag has been the center of a dispute.

In July, a Maine neighborhood was embroiled in controversy after one family flew the flag outside their home to honor a family member who died in the line of duty, CNN affiliate WGME reported.

"I had a citizen stop by my office and say she was concerned with a flag, the blue lives flag," York Town Manager Stephen Burns told the news station. "Some white supremacists used it as a connotation, even though it's a police flag."

Earlier this year, an Oregon county was forced to pay $100,000 to an employee who said she was subject to stress and racial harassment after complaining about a coworker's Blue Lives Matter flag.

Karimah Guion-Pledgure was a corrections technician and put up an "equity wall" in response to the flag, her lawsuit says.

About three years ago, Louisiana Gov. John Bel Edwards signed a bill expanding the state's hate crime statute to include the targeting of police officers, firefighters and EMS personnel.

Traditionally, a crime is considered a hate crime if the victim is targeted because of identity-based characteristics such as their race, ethnicity, religion, gender, sexual orientation, etc.

Louisiana became the first state to add a person's chosen vocation to that list.

"For those individuals who choose to target our heroes, the message formalized in this legislative act should be clear and the consequences severe," Col. Mike Edmonson, superintendent of the Louisiana State Police, said at the time.