A Maryland candy company is cooking up chocolate covered cicadas 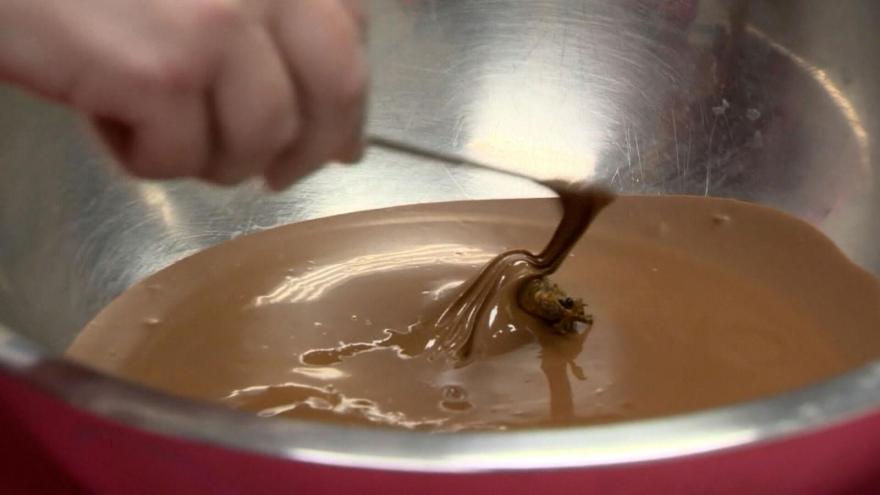 (CNN) -- A Maryland candy company is selling chocolate covered cicadas to celebrate the emergence of the noisy insects that have spent the last 17 years underground.

Chouquette Chocolates is selling the cicadas -- dipped in either milk or dark chocolate -- online, but it also posted the recipe on its Facebook page for brave chefs looking for something to do with the bugs.

Billions of cicadas from Brood X are emerging from their subterranean homes as temperatures warm up in the eastern United States. They'll spend the final days of their lives mating and making a tremendous racket as males work to attract females.

It's is expected to be the largest emergence event since 2004.

The fresh cicadas are frozen, given a quick dip in boiling water, then coated in oil and spices, before being air fried and dropped in chocolate, according to the instruction video. The video showed containers of cinnamon and Old Bay (because, Maryland), but the post said to use whatever spice you like.

"It's really crunchy because we air-fry them," she told WBAL.

Dwyer is also selling other cicada-themed chocolates that are insect-free for people who want to enjoy the bugs without eating them.

"I just thought the whole idea of having cicadas around every 17 years, it's fascinating," she told WBAL.

Dwyer isn't the only one serving up cicadas.

University of Tennessee professor Jerome Grant told CNN affiliate WVLT that you can boil the bugs or roast them, and he cooked them up in a stir fry and made street tacos.

Cicadas are low in fat, have a balance of vitamins and are high in protein, according to Cicada Safari, an app created by experts at Mount St. Joseph University to help map the emergence of Brood X.