A Marine veteran's military medals were stolen from his home. Detectives on the case replaced them 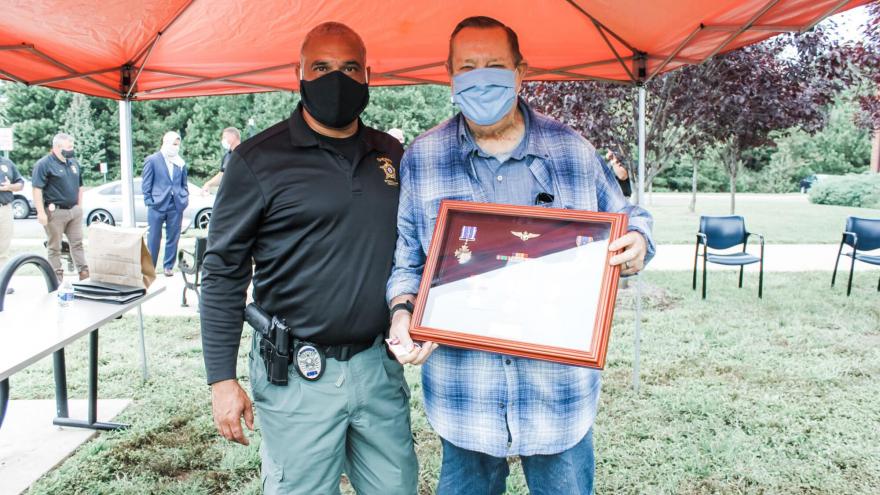 Retired Marine Corps Lt. Col. Thomas Faleskie holds a box containing the medals next to Det. Frank Corona, who helped organize the plan to replace them.

(CNN) -- For nearly 25 years, Thomas Faleskie served in the United States Marine Corps before retiring with the rank of lieutenant colonel. During that time he served in Vietnam and was awarded with several medals, including the Distinguished Flying Cross and an Air Medal.

But a burglary at the veteran's home last year resulted in the loss of tens of thousands of dollars' worth of items -- including his military medals, ribbons and pilot's wings, according to the sheriff's office in Spotsylvania, Virginia.

The loss hit home with Det. Frank Corona, who worked on the case, because he also served in the Marines. Corona quickly identified suspects in the burglary cases and recovered several of the stolen items at local pawn shops, according to the sheriff's office.

While he wasn't able to recover the original military keepsakes, Corona and his supervisor, also a Marine, were able to get them replaced by a company in South Carolina, the sheriff's office said.

Friday, days before Faleskie's 84th birthday, the detectives gave him special surprise. They presented Faleskie, who served from 1958 to 1982, with a shadowbox displaying replacements for all the military service medals, ribbons and pilot's wings that were taken from him.

"I'm still in a state of shock because I never expected this, and I still can't believe it happened, but I'm very happy," Faleskie told CNN affiliate WJLA.

"Usually that's what you expect from a fellow Marine, is total support and a bond of friendship," Faleskie said.

The ceremony to present the medals took place outside the Spotsylvania Sheriff's Office. Fellow Marines from a local veterans' group attended.

Three people were arrested in connection to the burglary and pleaded guilty to burglary and grand larceny charges, the sheriff's office said.