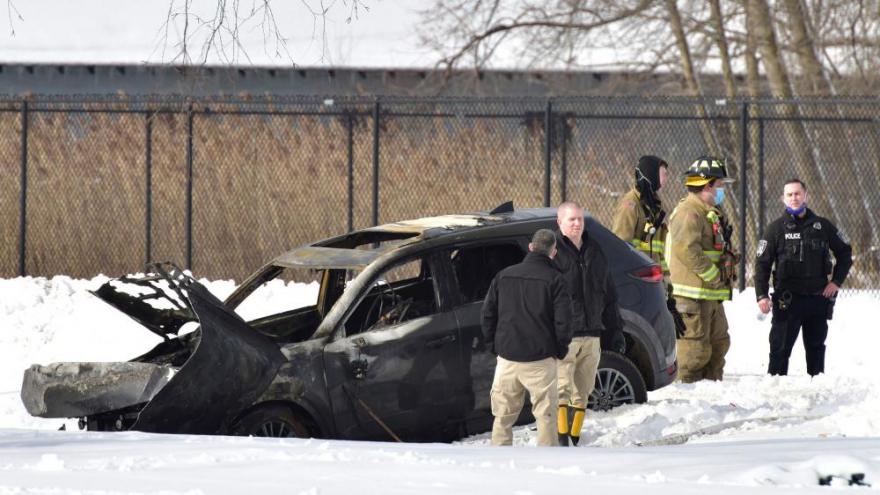 A man died in a car fire after revving his engine trying to get his vehicle unstuck from the snow inside of Losen Slote Creek Park in Little Ferry, New Jersey, on February 3, 2021.

(CNN) -- A man who was attempting to get his SUV out of a snowbank in New Jersey was killed after his vehicle caught fire, authorities said.

The Little Ferry Police Department said two officers responded to a call on Wednesday about a vehicle that was stuck in a snowed-over parking lot near Losen Slote Creek Park, about 14 miles from New York.

When they arrived, a 62-year-old man was repeatedly driving forward and reversing in an effort to extract his car from the snow, according to Little Ferry Police Capt. Ronald Klein.

After a brief conversation with the man, officers went to call for a tow truck and began to head back to their vehicles, Klein said. Soon, they heard a popping sound and saw smoke and flames coming from the SUV.

One officer tried to extinguish the fire while the other tried repeatedly to break in the windows and remove the driver, Klein said. Eventually, the officers were able to smash the rear passenger window. But by that point, the inside of the SUV was "fully engulfed in flames," he said.

The man, who has not been publicly identified, was pronounced dead at the scene, police said. His family has been notified.

The Bergen County Prosecutor's Office is investigating the cause of the fire.

The snow was part of a major winter storm that hit the Northeast and mid-Atlantic earlier this week, halting public transit, canceling flights and shutting down coronavirus vaccination sites.