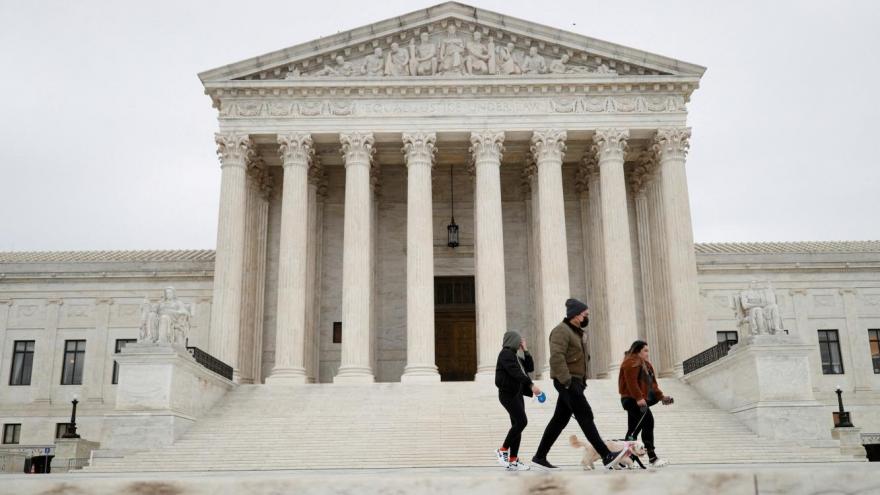 A man who died on April 23 after setting himself on fire in front of the US Supreme Court in Washington, DC, was a climate activist, according to social media posts from various people who claim to know him.

(CNN) -- A man who died on Saturday after setting himself on fire in front of the US Supreme Court in Washington, DC, was a climate activist, according to social media posts from various people who claim to know him.

Wynn Alan Bruce, 50, from Boulder, Colorado, who self-immolated on Friday -- when the world marked Earth Day -- suffered critical injuries and was airlifted to hospital, where he died, a police spokesperson said.

Those who knew Bruce, who had managed a portrait photo studio in Boulder, say he was protesting against inaction on the climate crisis.

Kritee Kanko, a climate scientist and a Zen Buddhist priest who claims to know Bruce through the same meditation group, wrote on Twitter that while they are still gathering more information, the activist may had planned on the act for at least a year. CNN could not independently verify their relationship.

"This act is not suicide. This is a deeply fearless act of compassion to bring attention to climate crisis," she posted on Twitter. "We are piecing together info but he had been planning it for at least one year. #wynnbruce I am so moved."

In an interview with The New York Times, Kanko clarified her tweet saying she was not entirely certain of Bruce's intentions, but rather that "people are being driven to extreme amounts of climate grief and despair." Kanko said she did not want "young people (to) start thinking about self-immolation.

About a year ago, Bruce responded to one of his own posts about climate change with a comment that included a fire emoji and the date "4/22/2022."

His last Facebook post on March 28 said, "This is NOT humor. It is ALL about breathing," referring to the need for clean air.

Earlier this year, Bruce posted a photo of teen climate activist Greta Thunberg with the caption saying, "What now adults?" In other social media posts, Bruce wrote about climate change, pollution, environment and his faith in Buddhism.

This isn't the first time someone set themselves on fire to protest inaction against climate change.

In April 2018, David Buckel, a lawyer and environmental advocate, drenched himself with gas and lit himself on fire in Prospect Park in Brooklyn, New York. In an email Buckel sent to the media before he died, he wrote, "Most humans on the planet now breathe air made unhealthy by fossil fuels, and many die early deaths as a result -- my early death by fossil fuel reflects what we are doing to ourselves."

In Buddhism, the ascetic practice of self-immolation -- where one voluntarily takes their own life, typically by setting themselves ablaze -- is extremely rare; it's a controversial practice among some adherents of the Mahayana tradition of the religion.

It was practiced in South Vietnam to protest the Vietnam War and continues to be used by Tibetans today. More than 100 Tibetans have set themselves on fire since 2009 to protest Chinese rule. Apart from those countries, it's a practice that has claimed the lives of hundreds (perhaps even thousands) of activists in India, South Korea and even Kurds protesting in Western Europe, according to sociologist Michael Biggs.

The incident comes as the Supreme Court is set to rule on what could be one of the most consequential cases for the climate crisis as well as clean air in decades. Republican state attorneys general and coal companies are asking the highest court to strip the Environmental Protection Agency of its authority to regulate planet-warming gas emissions from power plants.

As the climate emergency advances and its impacts continue to be felt around the world, climate scientists and activists have been ramping up efforts to bring attention to the crisis, through civil disobedience and risking arrest by blocking traffic and locking themselves to building entrances of financial institutions funding fossil fuel projects.

"Rest in power Wynn," climate scientist Peter Kalmus, who was recently arrested for locking himself to the entrance of JP Morgan Chase building in Los Angeles to protest the bank's funding of new fossil fuel projects, wrote on Twitter. "Everyone, we must fight side by side in solidarity for every fraction of a degree. It is NOT too late."