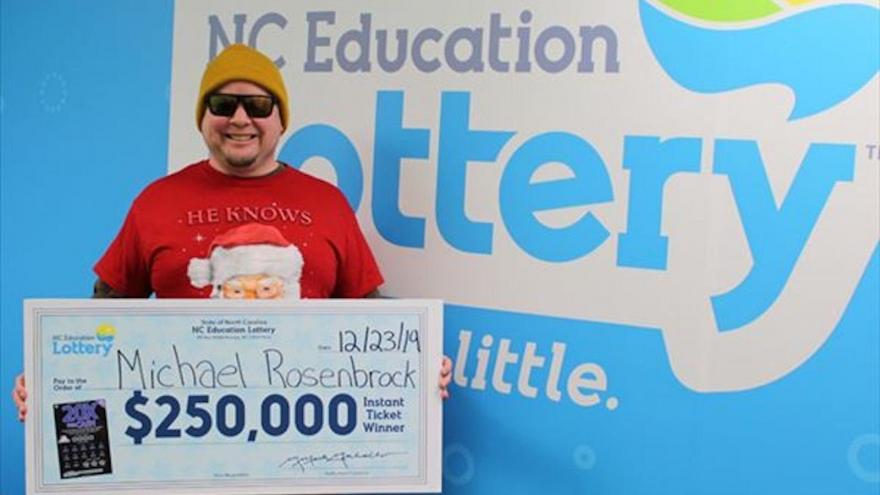 As he prepared to host his family for Christmas, Michael Rosenbrock loaded up his shopping cart with all the holiday feast fixings: Ham, stuffing, tasty treats and -- unbeknownst to him -- a quarter of a million dollars.

(CNN) -- As he prepared to host his family for Christmas, Michael Rosenbrock loaded up his shopping cart with all the holiday feast fixings: Ham, stuffing, tasty treats and -- unbeknownst to him -- a quarter of a million dollars.

"I'm hosting the family this year," Rosenbrock told the North Carolina Education Lottery. "I wanted to make sure I picked everything up early. I'm making ham, meatballs, stuffing, the whole shebang."

When he got home from grabbing the groceries, Rosenbrock sat down at his living room table in Mint Hill, North Carolina to scratch off a 20X The Cash scratch-off ticket he had bought at the store.

At first, the ticket seemed to be a dud. Then, he entered it into one of the state lottery's second-chance promotional drawings and was in for a big surprise.

"I didn't think I won anything at first," Rosenbrock said. "It's a good thing I always enter my tickets into the second-chance drawings or I would have thrown it away. I couldn't believe it when I realized I won $250,000."

The $5 ticket launched in August with three $250,000 prizes, the lottery said. Two of the prizes have been claimed, so there's only one lucky winner left for the ticket.

Money raised by the North Carolina lottery supports education programs across the state, including school construction, scholarships, grants and transportation.

Rosenbrock, who works in international shipping, claimed his prize at the lottery headquarters in Raleigh on Monday. After state and federal taxes, he took home $176,876.

He told the state lottery that he wants to use the money to kick-start his dream of founding a nonprofit.

"There are so many things that we take for granted," Rosenbrock said. "Clean water, food to eat, a roof over our head. Doing nonprofit work is something I've always wanted to do."