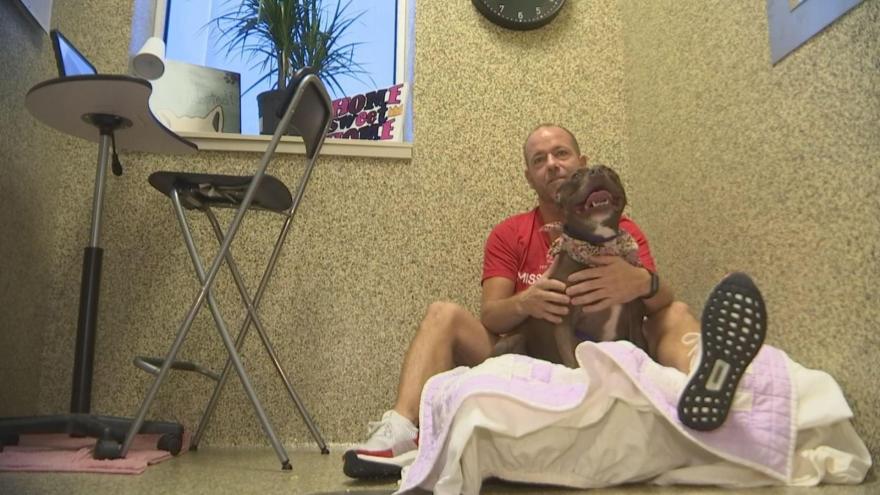 **Embargo: Kansas City, KS-MO** Scott Poore moved into an enclosed space in the Merriam shelter on a baby-sized twin mattress --- and he'll stay there until his friend Queen, a 3-year-old terrier mix, finds a forever home.

(CNN) -- Queen, a 3-year-old terrier mix, has been sitting at the Great Plains SPCA shelter in Kansas for more than a year.

But she's not sitting alone anymore.

Scott Poore moved into the dog's enclosed space in the Merriam shelter on a baby-sized twin mattress --- and he'll stay there until his friend finds a forever home.

"I've got my laptop, my desk, my lamp and I brought a plant in," Poore told CNN affiliate KCTV. And he'll need them, because Poore won't be taking time off his job during his shelter stay. He oversees Mission Driven LLC,, a clothing brand bringing awareness to shelter pets and the importance of adoption, according to the company's website.

"This is my office," he told the affiliate.

Poore's made it his life mission to bring awareness to the issue. He spends a big part of each week in animal shelters and creates fundraisers to help them meet their needs, the company's website says.

"Queen is really speaking for all long-term shelter dogs and shelter cats, they're kind of the forgotten ones," Poore told KMBC.

The dog came into the shelter more than 400 days ago. Before that, she had been living behind a dumpster and had suffered an injury similar to a torn ACL, KCTV reported.

After her surgery, Poore noticed she'd "been slowly declining in the shelter environment," he told KMBC. So that's when he decided to move in with her.

"It's something I see in their eyes because this dog would jump up, get up on the window,' he told KCTV. "Every time I came, she got so excited, but the last couple months she won't even get out of bed."

"She keeps getting looked over and that's the thing that's driving me crazy," he said.

How big of a problem is this?

Queen isn't the only dog that goes unnoticed. Only 1 out of every 10 dogs that are born find a forever home, according to the non-profit DoSomething.org.

About 6.5 million animals enter American animal shelter every year, according to the American Society for the Prevention of Cruelty to Animals, but only 3.2 million are adopted each year.

And we're not necessarily saying you should pack up your pajamas and toothbrush and start calling an animal shelter your temporary home to help with adoptions but really... how cool does that sound?