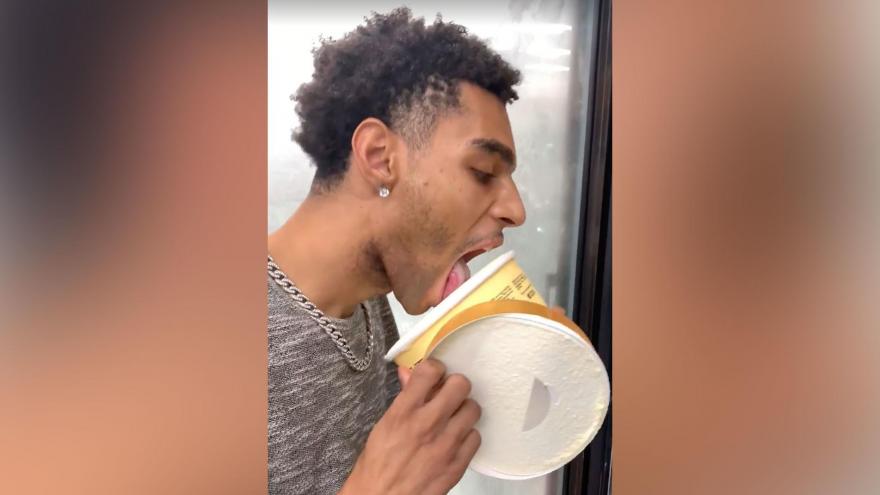 (CNN) -- Licking open containers of Blue Bell ice cream and sticking them back on freezer shelves was a fleeting fad in the summer of 2019 that delighted viral fame chasers and enraged law enforcement.

Now one of the lickers who got caught will serve jail time and pay over $2,000 in fines and restitution.

He'll also pay a fine of $1,000 and restitution of $1,565 to Blue Bell Creameries, the Jefferson County District Attorney's Office said in a statement.

Anderson filmed himself licking the ice cream in August, more than one month after a clip of a juvenile doing the same thing racked up millions of views.

The 24-year-old told CNN affiliate WOAI he only did it to go viral. But the Jefferson County District Attorney's Office said the act was "much more than a stunt."

"He is just a copycat," district attorney Bob Wortham told WOAI in January. "And the way to stop copycats is to enforce it very strongly."

Anderson later claimed he bought the ice cream after licking it and putting it back in the freezer, but the court said his act was costly to the creamery company, which replaced its inventory after spotting his video.

Blue Bell said it was "pleased to see this matter had been resolved" in a statement to CNN.

After the first viral incident in June, the Texas creamery condemned the act and said it had removed all half-gallons of the ice cream flavor seen licked in the video.

"Food tampering is not a joke, and we will not tolerate tampering with our products," the company said.

The teenager believed to have kicked off the trend was not charged as an adult for licking the dessert. But a 36-year-old Louisiana man was arrested in July for doing the same thing. Police investigating that incident said they believed he'd wanted to "create some notoriety" for himself by posting the footage on Facebook.