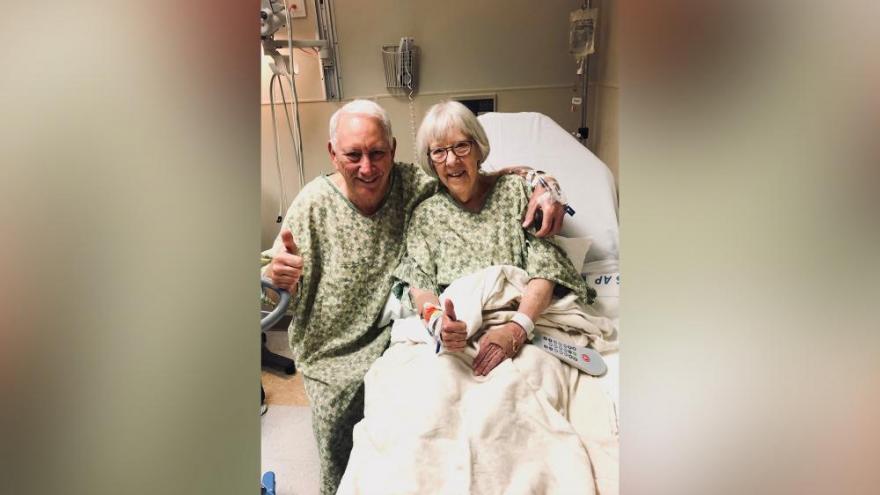 Mike Nipper donated his kidney to his wife of 51 years, Peggy, when hers began to fail.

(CNN) -- Finding your loved one a perfect gift can be hard. But a diamond ring, silk dress, or designer bag couldn't come close to Mike Nipper's gift to his wife of 51 years.

Mike donated his kidney to his wife, Peggy, after hers began to fail as a result of polycystic kidney disease (PKD). The genetic condition causes cysts to develop in the kidneys, often leading to kidney failure when the organ becomes too enlarged.

"It was quite a gift," Peggy told CNN. "I don't think he has to give me another gift for the rest of my life. This was the ultimate present."

Peggy lost her own mother to the same disease, and her brother, who also inherited PKD, has reached stage three kidney failure.

So when Peggy's kidney was functioning at just 14 percent, she only had two options: go on dialysis or get a transplant.

A match made in heaven

For those lucky enough to get on the national transplant list, it usually takes about seven years before finding a match - and if you're an older person, that's only if you can find a hospital willing to perform the surgery on someone over 70 years old.

The other hard part is actually finding someone who's a match.

"We didn't even think there was a possibility for him to be a direct match," Peggy, who is 74, told CNN. "If you carry babies from your husband, your blood has been mixed and very often you develop antigens against that blood because of bearing children. So we didn't even know it was a possibility."

When Mike checked out on both blood type and the six antigen tissue match, it was an actual miracle. As it turned out, Mike was quite literally her perfect match, and he'd been there all along.

The true romantic said he didn't have to think twice about giving up a kidney. Peggy is his soul mate, after all.

"We're different people, I'm from Mars and she's from Venus but our differences will always complement each other," Mike said.

Peggy is now recovering and so far, her body is reacting well to her new kidney.

When it comes to the secret to their long lasting romance, Mike says its all about the love.

"I think I'm really committed now," Mike said. "We promised each other, in sickness and in health until death do us part, and that's how its going to be. We're just trying to extend that death do us part for as long as we can."