A man brought a llama to his sister's wedding, delighting just about everyone but the bride 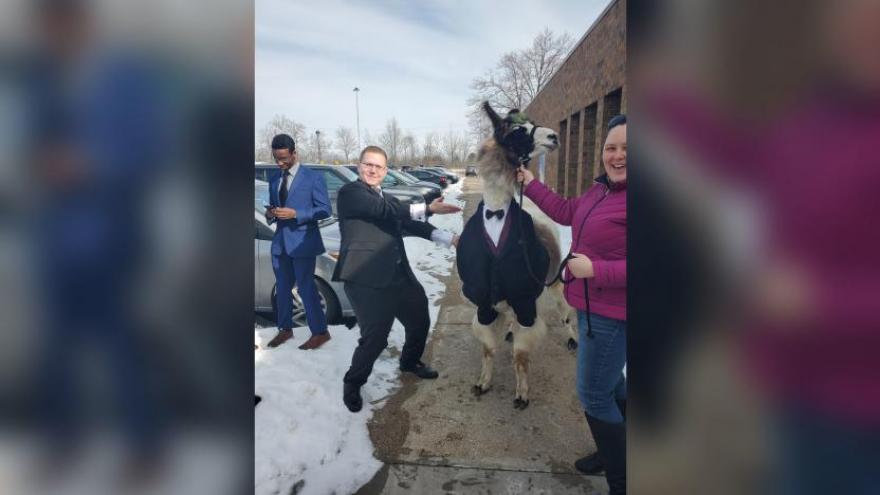 Mendl with the llama he rented for his sister's wedding.

(CNN) -- With her crisp white dress and beautifully done hair, the bride arrived at the wedding hall ready to be married.

Then she saw her brother. And next to him, a llama.

Riva Weinstock was unamused, but she didn't need to say so -- her reaction to the well-dressed wedding crasher was caught on camera and seen around the world.

Her brother, Mendl, posted the photo on Reddit where it quickly blew up, receiving more than 150,000 upvotes. That made it the top overall post this week and the subject of much internet joy.

How the llama came to be

The gag started five years ago when Riva and Mendl were driving from their home in Ohio to Indiana with some friends.

"She was talking about her wedding, planning it, making plans almost as if it was going to happen the next day even though she wasn't dating anybody at the time," Mendl told CNN.

The nonstop talk between the three teenage girls got on Mendl's nerves.

So as little brothers do, he blurted out something that he knew would get a good reaction out of her.

"I said, 'If you make me come to this wedding, I'm going to bring a llama with me," Mendl recalled. "It was just the first thing that popped into my head."

Naturally, Riva got upset and said that he was going to ruin her special day. But thinking that it was just a joke, she accepted the idea and said, "I give up. The llama is invited to the wedding."

Fast forward five years and Riva got engaged in October. She called Mendl with the happy news. Not even an hour later, she received a text that said his llama rental was confirmed.

"When my brother puts his mind to something, he gets it done. So at some point I had to accept it and decide that it was easier to get in on the joke than to fight it," Riva said.

Mendl rented a llama for $400 from a llama farm near Cleveland and even had a custom tuxedo made.

While $400 is a lot to shell out for a 21-year-old college student, Mendl said it was worth every penny.

"It was so worth it. I mean it was worth it just to see her reaction, but it's been more worth it now that I've gotten all this internet fame," Mendl said.

The llama, named Shockey, stayed outside of the wedding hall on Sunday for about 30 minutes, taking pictures with guests. "I was not too thrilled. I think my face in the picture pretty much wraps it up," Riva said.

But unknown to Riva's knowledge, it seems that everyone was in on the llama joke as it continued even inside the wedding hall -- two inflatable llamas were placed at the sweetheart table by her friend.

Riva said she is thankful for the close relationship she has with her brother and that he definitely made her wedding memorable.

And while getting back at him at his own wedding might seem a bit too predictable, she mentioned that his college graduation is around the corner.

"I've definitely started planning my revenge," Riva said. "He should sleep with one eye open."