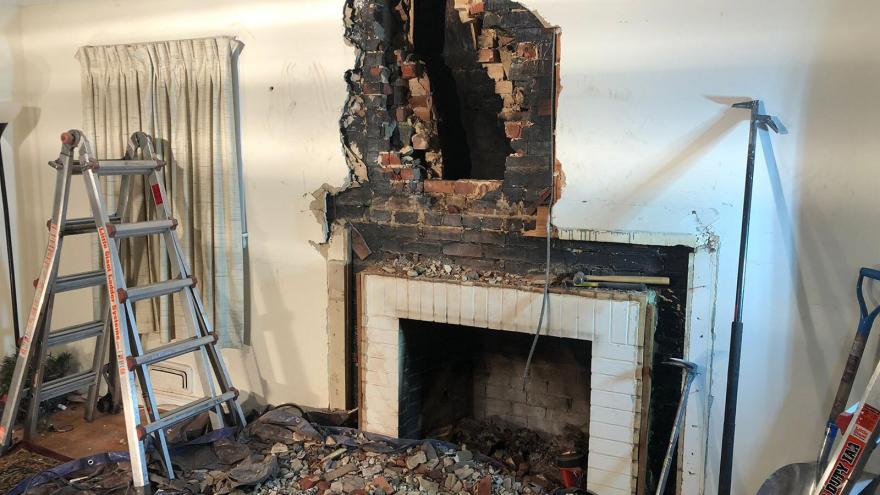 The scene where firefighters tore down a wall to rescue a man trapped in the chimney.

(CNN) -- A family in Silver Spring, Maryland, received an unfortunate surprise when they discovered a stranger was trapped inside their chimney while attempting to enter their home.

The 24-year-old man was wedged inside the chimney for at least four hours before firefighters were able to rescue him, Montgomery County Police Department (MCPD) said in an incident summary report.

Authorities applied for fourth degree burglary charges against the suspect, whose identity will not be released until the courts accept the charges, MCPD spokeswoman Shiera Goff told CNN.

On January 8, around 3 a.m., residents inside the home called 911 to report a pounding or "knocking" sound coming from inside the home, the report said. Authorities responded to the call but did not find anyone after searching the house.

The residents called police again around 5:30 a.m. and reported hearing the same noises.

"The call was originally dispatched as a residential burglary call in progress," MCPD said, and when officers responded, they "heard a human voice coming from inside the fireplace, in the chimney."

Two dozen firefighters were called to the scene and spent more than an hour removing the wall and bricks around the chimney to rescue the suspect, who "was not authorized to be there," Montgomery County Fire and Rescue Service Spokesman Pete Piringer said on Twitter.

Videos and photos posted by Piringer showed firefighters breaking the wall down brick by brick until the man's feet were visible. Another video showed the suspect being taken away in an ambulance.

The man was successfully extracted from the chimney around 7:30 a.m. and was then taken to a trauma center, Piringer said.

"The suspect was not immediately charged," Goff said. "He was taken to an area hospital and a request for charges were filed on Thursday."