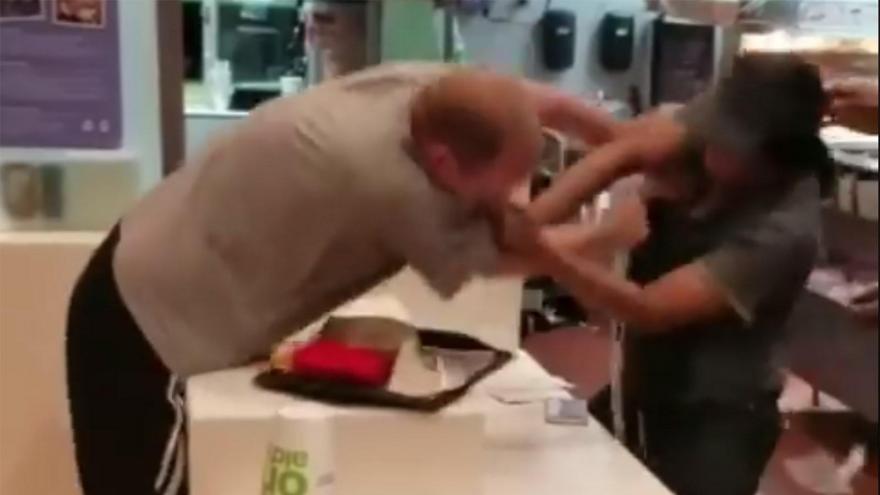 A new plastic straw law had unexpected consequences when a man lashed out at a worker at a fast food chain.

(CNN) -- A new plastic straw law had unexpected consequences when a man lashed out at a worker at a fast food chain.

The Florida man had just gotten his order Monday evening at a McDonald's in St. Petersburg. He got upset when there weren't any plastic straws out at the condiment station, witness Brenda Biandudi told CNN.

He walked back to the counter and got in a heated argument with an employee about the straws, Biandudi said. Then, video shows him reaching over the counter and grabbing the employee, Yasmine James.

By the end of the night, Daniel Taylor, a 40-year-old homeless man, would be arrested on two charges of simple battery, according to an arrest affidavit from the St. Petersburg Police Department. A lawyer for Taylor could not be reached Wednesday night.

A city ordinance went into effect on January 1 that requires customers to ask for straws. It's a way for businesses to adjust before a ban on single-use plastic straws takes effect in January 2020.

Taylor said the employees weren't doing their jobs. "She told him we're not allowed to have (straws) in the lobby but he can get one upon request. He said there was no such law. He started exchanging words laced with profanity, which I won't repeat," Biandudi, 62, said.

"I looked at my camera and I thought I may need to record this since there were so few people in the store. As soon as he approached her, I hit record. He reached across and tried to grab her and hit her," she said.

James and her attorney, Michele Rayner-Goolsby, spoke out about the attack on HLN on Friday.

"I didn't know if he had a gun, a knife or what was he going to do to me. I felt very alone because no one helped me or anything," James told HLN on Friday. "I was very overwhelmed and stressed because a man just grabbed me and tried to attack me."

"He was upset about the straw, but I don't think that the conversation that we had was enough to lead up for him to grab me," she said.

Rayner-Goolsby said James was "lucky" she wasn't hurt in the attack, but said more needs to be done to protect employees from these situations.

"She never should have been in this position in the first place," Rayner-Goolsby said. "One of the things that she is very passionate about as a result of this is ensuring that violence against women and violence against workers stops. For her, this is the last straw."

The argument reportedly started over straws

Biandudi had gone into the McDonald's to use the restroom and buy a drink when she heard the yelling begin. It was early in the evening on New Year's Eve and her daughter was in the drive-through, picking up an order.

As seen in the video, Taylor leaned over the counter and quickly grabbed James, who was working the register, by the shirt collar. He pulled her close to his face.

Seconds later, James started whaling on the man, punch after punch. They gripped onto each other as the woman defended herself. Fists flew and so did expletives.

People could be heard saying "stop" and "let her go" in the background. It took employees almost 15 seconds to separate them.

After being pulled from Taylor's grip, James yelled and cursed at the man as she was led away by a colleague. Taylor flagged a male McDonald's employee to ask a question.

James returned to look for her phone, and Taylor shouted, "I want her a** fired right now."

"No, you're going to go to jail. You put your hands on me first," she yelled, clapping her hands together.

Taylor hurled more profanities at her, saying he was just trying to ask a question. Another McDonald's employee asked him to leave.

Before leaving the restaurant, St. Petersburg Police said, the man kicked another employee in the stomach as she stood near the exit.

James was not injured, according to the affidavit. Tateona Bell, the employee who was kicked, complained of pain afterward.

By that time, Biandudi had gotten her order and gone outside to her daughter. She said she watched as another employee was finally able to escort the man outside.

"I knocked on the door and pointed to my phone and said I have a video and they let me in. They had locked the door when they got the man out of the store," Biandudi said.

When police arrived, she talked to officers and gave them the video of the incident.

Officers recognized the man when he called police later

Soon after the incident, Taylor called the police from a couple miles down the road to complain that he'd been hit repeatedly in the head, police spokeswoman Sandra Bentil told CNN.

"When the officers arrived, they recognized Taylor from the video at McDonald's and took him into custody," police said in a statement.

Bentil said the motive behind the attack is still under investigation.

McDonald's is aware of the incident and cooperating with police.

"Our highest priority is always the safety and well-being of our employees and customers at our restaurants. We have been in contact with the police department and are fully cooperating with their investigation," Khim Aday from McDonald's corporate communications told CNN in a statement.

James is on paid leave and is still employed, the company said Friday.

"Given the nature of the situation, we offered Ms. James paid time off until Sunday," Aday told CNN.

Biandudi said she was "very reluctant" about her children posting the video online. It had more than 4 million views on Facebook as of Friday.

"I felt it was so disrespectful to talk to an employee like that and belittle her like that," Biandudi said.

"I want all the employees at McDonald's to be safe. I think they acted appropriately," she said. "I want peace. I want them to keep their jobs and the man to get some help. We all need to learn how to talk to people in public and show them some respect."