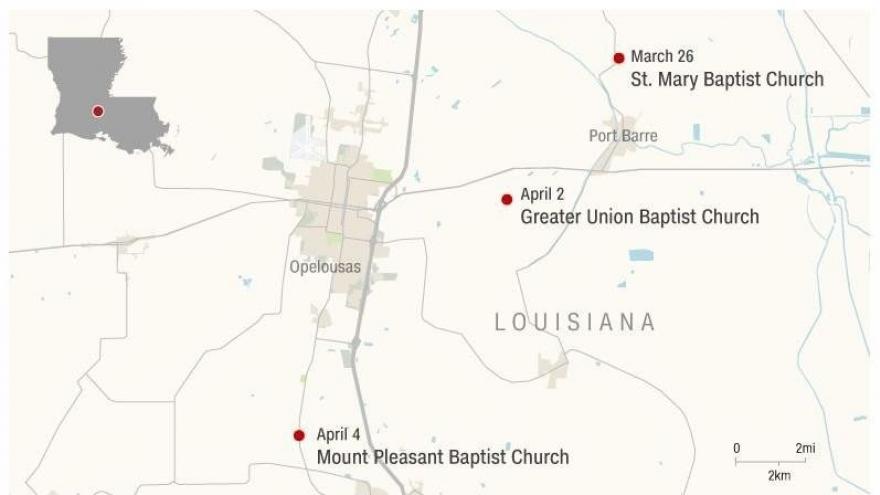 (CNN) -- A suspect in arson fires at three historically black Louisiana churches is a law enforcement officer's son who may have been influenced by "black metal" music and its "associated history with church burnings," the state fire marshal said Thursday.

The man was identified as Holden Matthews, 21, according to Gov. John Bel Edwards, who called the blazes a reminder of "a very dark past of intimidation and fear."

The three churches in the heart of south central Louisiana's Cajun and Creole country were set ablaze in the span of 10 days.

"I don't know what this young man's motive was, I don't know what was in his heart, but I can say it cannot be justified or rationalized," Edwards told reporters. "These were evil acts. But let me be clear about this, hate is not a Louisiana value."

Matthews is charged with three counts of simple arson on a religious building, State Fire Marshal H. "Butch" Browning said. Each charge carries a maximum penalty of 15 years. The suspect has no history of violence or prior arrests, officials said.

The charred remains of a Scepter-branded, 2-gallon gas can ultimately led investigators to Matthews, according to a court affidavit. A pickup truck believed to have been driven by the suspect was captured by surveillance cameras leaving the parking lot of Greater Union Baptist Church moments before it went up in flames.

The affidavit said the pickup was later captured driving by the fire scene and slowing down. A firefighter also reported seeing the pickup near the burning church.

The gas can was discovered by federal ATF agents on Tuesday at Mount Pleasant Baptist Church, the affidavit said. Investigators learned that a Walmart in Opelousas was a local seller of the Scepter-branded can.

Walmart informed investigators that two Scepter cans were purchased late on March 25 -- less than three hours before the first fire -- along with a 10-pack of automotive cloths and a lighter, according to the affidavit. The receipt showed the purchase was made with a debit card in the name of Holden Matthews.

Investigators also obtained surveillance photos of the purchaser and the pickup he was driving. The affidavit said a Ford pickup like the one Matthews was driving was registered to the suspect's father, Roy. Matthews' cell phone was traced to the area of the fires.

"We're not actively searching for anyone else, but the investigation is still going on," Browning said.

Officials suspect other crimes were imminent

Matthews was first considered a suspect Wednesday morning, and investigators quickly obtained an arrest warrant to pick him later that day.

"We saw an immediate threat to public safety," Browning said. "We felt that other crimes were imminent. ... The threat is now gone."

The motive is still under investigation, and federal officials are looking into whether the fires represent a hate crime.

"Information investigators have uncovered, and that Matthews has offered, suggests a possible connection with a genre of music called 'black metal' and its associated history with church burnings in other parts of the world -- which have been documented in movies and books," Browning said. "Any questions as to the potential motives of hate are continuing to be vetted by federal authorities."

Matthews was active in Facebook groups that focused on black metal and heathenism and Nordic religious beliefs, according to posts seen by CNN. In one post he wrote that he held Asatru beliefs, which center around Norse gods. In a separate post, he appeared to admit to carrying a handgun illegally.

Matthews is the son of a local sheriff's deputy, St. Landry Parish Sheriff Bobby Guidroz said. The sheriff said he broke the news of Matthews' alleged involvement to the deputy, whom he described as one of his best friends.

"As we all know, Holden's father is an employee of mine, a fine man," Guidroz said. "He was shocked and hurt as any father would be ... He was in terrible shape."

Gerald Toussaint, pastor at Mount Pleasant Baptist Church, joined officials at Thursday's news conference. He thanked investigators and said donations have been pouring in for the rebuilding of the churches.

"It started off a dark moment in our lives, but with the rebuilding process you're going to see some things ... that are going to be very bright for our churches."

Officials are also investigating a fourth, smaller fire on March 31 at the predominantly white Vivian United Pentecostal Church in Caddo Parish, more than 200 miles north of St. Landry. The blaze was intentionally set. Officials said Thursday they had no evidence linking the Caddo fire to the other three.

The FBI and federal Bureau of Alcohol, Tobacco, Firearms and Explosives are assisting in the investigations. The NAACP has labeled the fires "domestic terrorism," adding that the "spike in church burnings in Southern states is a reflection of the emboldened racial rhetoric and tension spreading across the country."

Once a common occurrence

Church burnings were a common occurrence in the Jim Crow era. And fires at black churches -- especially those in the South -- immediately bring to mind such racist attacks.

"For decades, African-American churches have served as the epicenter of survival and a symbol of hope for many in the African-American community," NAACP President and CEO Derrick Johnson said. "As a consequence, these houses of faith have historically been the targets of violence."

Several black churches in the South were burned in 2015 shortly after the mass murder of nine people at the Mother Emanuel African Methodist Episcopal Church in Charleston, South Carolina, though it's unclear if those fires were racially motivated.

According to the latest data from the National Fire Protection Association, fires within religious and funeral properties have been on the decline for decades. Between 2007 and 2011, 16% were ruled intentional, according to the association.