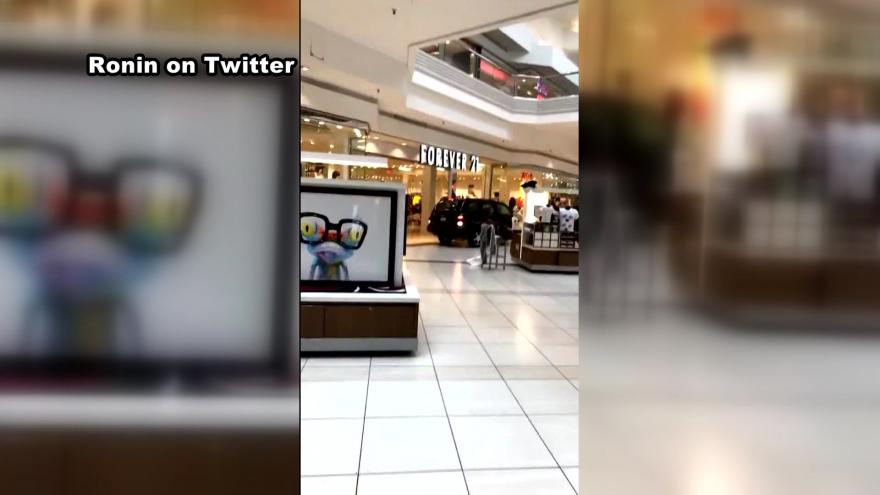 (CNN) -- A man accused of driving an SUV through an Illinois mall earlier this month has been charged with terrorism but his motive remains unknown, police said Saturday.

Javier Garcia, 22, is also charged with criminal damage to property in the incident in Schaumburg, a suburb of Chicago.

Police said Garcia drove an SUV through an entrance of the Woodfield Mall on September 20.

Video of the incident shows the vehicle moving slowly through the mall's interior. Schaumburg Police Chief Bill Wolf said the SUV was driven "fairly deep" into the mall.

Three people were transported to the hospital with injuries, which were not life-threatening and not a result of the SUV hitting anyone, police said at the time.

Wolf, the police chief, said in the hours after Garcia's arrest there was "no indication that this incident is related to any type of terrorist act."

Garcia, of nearby Palatine, Illinois, did not have any connection to the mall and was not angry, Wolf said.

Garcia was in the mall "for a very short period of time" before the SUV was driven through the entrance, but there was no evidence he was casing the shopping center, Wolf said.

The terrorism charge stems from an Illinois law that partly defines a terrorist act as "any act that causes substantial damage to any building containing 5 or more businesses of any type."

The motive for Garcia's alleged actions is unknown. Police said they have no reason to believe he was targeting anyone in the mall

Garcia was transported to AMITA Health Behavioral Medicine Institute for treatment and remained there until Friday, police said. He was due in bond court Sunday.