A major oil spill off the California coast has caused dead birds, fish and oil to wash up on Huntington Beach, officials say 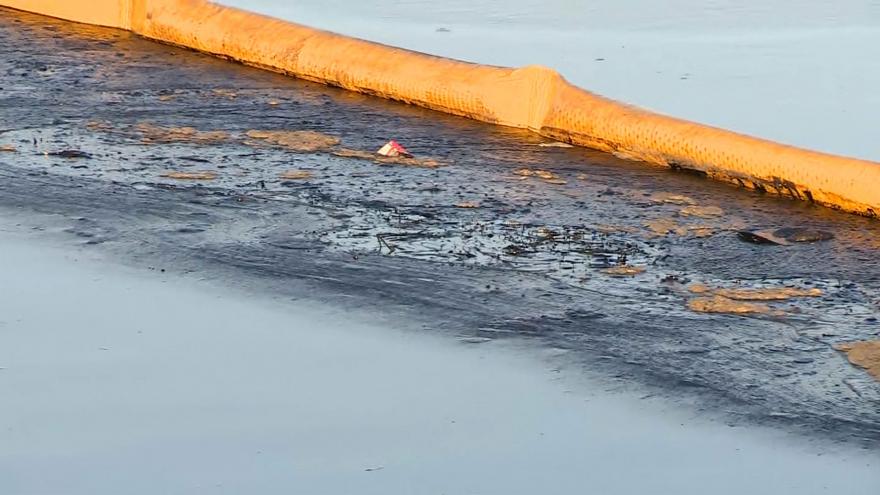 (CNN) -- A spill of about 3,000 barrels of oil -- or roughly 126,000 gallons of post-production crude -- off the coast of Southern California is a "potential ecological disaster," Huntington Beach Mayor Kim Carr said Saturday.

Foley said the leak was about 5 miles off the coast of Huntington Beach, and oil has started washing up on the shores of the city of 200,000 people.

As of Sunday morning, "the leak has not been completely stopped," Huntington Beach said in a press release. It said preliminary patching has been completed to repair the oil spill site, and additional "repair efforts will be attempted in the morning."

"Currently, the oil slick plume measures an estimated 5.8 nautical miles long, and runs from the Huntington Beach Pier down into Newport Beach," the press release said.

Carr said information from the US Coast Guard indicates the spill may be the result of an oil release from an offshore oil production operation near Huntington Beach.

The exact cause of the spill has not been determined and the owner of the pipeline is unknown, city officials said. They said the Coast Guard is investigating.

The oil sheen was first reported to the USCG shortly after 9 a.m. Saturday morning, the Coast Guard said in a press release.

Huntington Beach officials canceled the final day of the Pacific Airshow and are encouraging people to stay away from the Santa Ana River Trail, Talbert Park and Talbert Marsh areas and the beaches in the impacted areas to prevent contact with potentially toxic oiled areas.