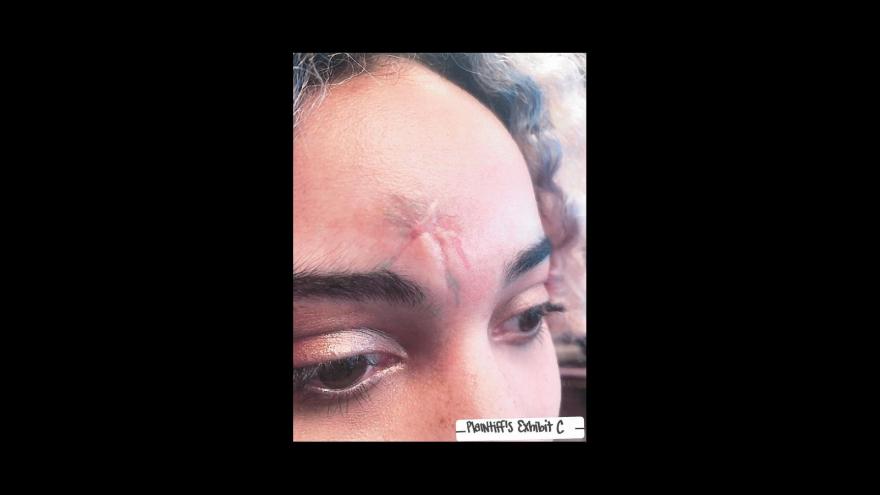 A Louisville protester is suing the city and two police officers alleging she was unarmed and shot with a rubber bullet in the face.

(CNN) -- A 24-year-old woman is suing the city of Louisville, Kentucky, and two of its police officers after allegedly getting shot in the face with a rubber bullet while peacefully protesting in May.

Shannyn White was out on May 29, protesting the killings of Black Americans, such as George Floyd and Breonna Taylor, at the hands of police, according to the lawsuit, which was filed Monday.

Demonstrations in Louisville have been ongoing since spring and were reignited after last week's announcement from Kentucky's attorney general that no officers were charged in Taylor's death. Louisville police reportedly responded to protesters with rubber bullets in September, a Daily Caller reporter covering the demonstrations previously told CNN.

The officers in the lawsuit are not named. The Louisville Metro Police Department declined to comment on the lawsuit and its allegations.

The lawsuit says White was standing unarmed with about 20 other people while videotaping the protesters' chants on her cell phone when "suddenly, with no warning and for no legitimate reason," Louisville officers fired projectiles at the group.

The lawsuit says White was shot in the face. One of the unnamed officers in the suit is being sued for allegedly shooting White, and the other for purportedly giving the order to shoot.

White dropped to her knees, unable to see, and other protesters attempted to stop the bleeding from "a large wound to her head," the suit says. No LMPD officers approached to help White with her injuries or to call emergency services, the suit alleges.

According to the lawsuit, other protesters helped White get to a nearby hospital where she was treated for her injury. She experienced dizziness and had "issues with her vision" for two days after the incident and has a large scar on her forehead, photographic exhibits included with the lawsuit show.

"The Defendants' actions were carried out in such a manner and with such a significant amount of unnecessary actions that they shock the conscience, and unreasonably restrained Ms. White of her freedom," the lawsuit says.

White claims her First, Fourth and 15th Amendment rights were violated and is suing for damages in "excess of $15,000," according to the lawsuit.