A Los Angeles explosion melted firefighters' helmets and set their coats on fire. 4 responders are in the ICU 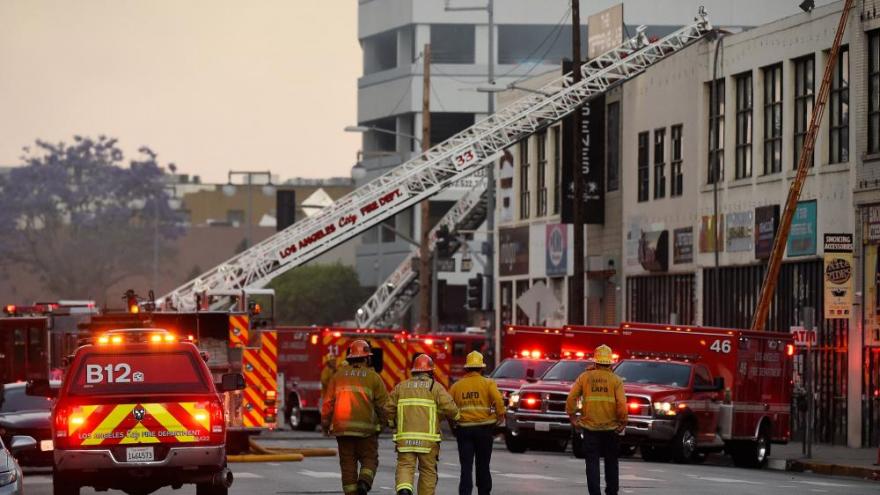 The fire prompted a "Mayday" call, and more then 230 firefighters responded to the scene.

(CNN) -- An explosion in downtown Los Angeles forced firefighters to walk though "a fireball," setting their coats ablaze and sending four crew members to an intensive care unit.

Firefighters initially responded to a blaze near Little Tokyo and Skid Row on Saturday evening when "light to moderate" smoke was coming out of a building, Los Angeles Fire Department Chief Ralph M. Terrazas said.

"The building was locked, so the crews had to use power saws to force their way in," LAFD spokesman Capt. Erik Scott said.

The blaze may have started at Smoke Tokes Wholesale Distributor -- "reportedly a supplier for those who make butane honey oil," LAFD said.

Some firefighters entered on the ground while others climbed up on a ladder to try to ventilate the roof, Scott said. But firefighters started to hear a rumbling, high-pitched sound, and a call was made for everyone to get out.

Suddenly, an explosion shot flames and smoke into the sky. Scott said crew members had to "go through a fireball" when they were coming down the ladder.

It was like going through "a 30-foot-tall blow torch," Scott said.

"After, on the street you could see the firefighters' protective equipment had been pulled off -- coats burned, parts of helmets melted," he said. "The fire truck parked across the street had char on it. The seats in the truck began to burn."

Witnesses said some of the firefighters' coats were on fire as they escaped, LAFD said.

At least 11 firefighters were injured, and all are expected to survive, officials said.

He said two firefighters were put on ventilators "to protect their airway, which showed some early degree of swelling from inhalation of the super-heated gases."

"Butane a highly flammable colorless gas, and there was apparently an abundance of it inside," Scott said.

"I wasn't close enough to determine if anyone was harmed but am concerned for the unhoused residents in the area and the neighboring residents in the senior/low-income housing as the air quality was affected for blocks," he said.

The disaster prompted a "Mayday" distress call around 6:30 p.m. "A Mayday to us means a firefighter is missing, down or trapped," the chief said.

More than 230 firefighters tried to extinguish the flames, which spread to multiple buildings, LAFD said.

Those who responded will work with mental health professionals, Chief Terrazas said.

"A lot of our firefighters were traumatized," he said. "I spoke to them directly, and they're holding up. But when one of your own is injured ... you can imagine the amount of emotional stress."

The causes of the fire and explosion are under investigation.