A look at where Wisconsin's lame-duck laws, challenges stand 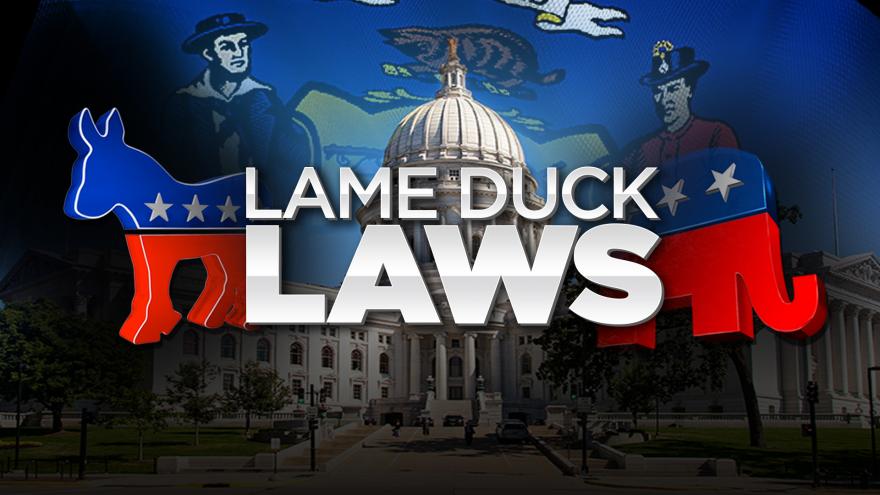 MADISON, Wis. (AP) — The Wisconsin Supreme Court has reinstated almost all of the laws passed by Republicans during a December lame-duck legislative session that limited the powers of the state's incoming Democratic governor and attorney general. The legal dispute isn't over, but the conservative-leaning court's actions show the difficulties challengers will face as they pursue multiple lawsuits seeking to derail the laws.

Here's a look at the laws and the legal challenges:

WHAT DO THE LAWS DO?

The measures prohibit Gov. Tony Evers from ordering Attorney General Josh Kaul to withdraw from lawsuits, a move designed to prevent Evers from pulling Wisconsin out of a multistate lawsuit challenging the Affordable Care Act, otherwise known as Obamacare. Evers was eventually able to withdraw from the lawsuit while the provisions were on hold in March.

The laws require Kaul to get permission from the Legislature's Republican-controlled budget-writing committee before he can settle lawsuits and deposit any settlement awards in the state's general fund rather than in state Department of Justice accounts. The laws also grant legislators the right to intervene in cases using their own attorneys rather than DOJ lawyers, signaling Republicans don't trust Kaul to represent their views in court.

In the past, municipalities could set their own hours. Madison and Milwaukee, both Democratic strongholds, held early voting for six weeks leading up to last November's elections. Republicans hope the shorter window will tamp down Democratic turnout in 2020. A federal judge blocked the restrictions in January.

Other provisions require state agencies to take down publications explaining state law by July unless they send all the documents through a new process that includes a public comment period.

A number of liberal-leaning groups have filed lawsuits challenging the laws.

Five unions, including the Service Employees Union, SEIU Healthcare Wisconsin, the Milwaukee Area Service and Hospitality Workers, the American Federation of Teachers and the Wisconsin Federation of Nurses and Health Professionals filed suit in state court in February contending that the laws violate the separation of powers because they steal authority from the executive branch and shift it to the Legislature.

The state Democratic Party filed a lawsuit in federal court in February as well alleging the laws are meant to retaliate against Evers' supporters, violating constitutional free speech and equal protection guarantees.

WHERE DO THINGS STAND?

U.S. District Judge James Peterson quickly shot down the early-voting restrictions in mid-January, ruling that they mirror restrictions he blocked two years earlier. That decision is part of a larger One Wisconsin Now case challenging Republican-authored voting laws that is currently before the 7th U.S. Circuit Court of Appeals.

Dane County Circuit Judge Richard Niess issued an injunction in March in the League of Women Voters case blocking the laws. Evers seized the opening to withdraw the state from the Affordable Care Act lawsuit. The 3rd District Court of Appeals stayed Niess' injunction later that month, however. The state Supreme Court heard oral arguments in the case in May but has yet to issue a final ruling resolving the case.

Another Dane County judge, Frank Remington, in March blocked the requirements that Kaul obtain legislative permission before settling lawsuits and turn over settlement awards to the general fund. Remington also blocked the new guidance document publication process. The state Supreme Court decided 4-3 Tuesday to reinstate the Kaul provisions while it considers the merits of the case. The justices haven't set a briefing schedule yet.

DO THE LIBERAL GROUPS HAVE ANY CHANCE OF WINNING?

They've already won a victory with Peterson's ruling blocking the early-voting restrictions. It's unclear, though, how the federal appeals court might rule and how the state Democratic Party's lawsuit might play out in federal district court. Crocker was appointed by former Democratic President Bill Clinton in 1992.

The plaintiffs have little chance of prevailing in state court. Conservatives control the Supreme Court 4-3, and that majority is set to grow to 5-2 when conservative Brian Hagedorn replaces Shirley Abrahamson in August.

The conservative justices signaled during oral arguments in the League of Women Voters case that they're not buying allegations that the lame-duck session was illegal, noting that the Legislature has been meeting in unscheduled sessions for 40 years.

In their ruling Tuesday lifting Remington's injunction in the unions case, the conservatives wrote that laws are presumed to be constitutional and that presumption supports Republican legislators' request to stay Remington's injunction. The conservatives added that whenever a law enacted by elected representatives is declared unenforceable, the public as a whole suffers "irreparable injury of the first magnitude." The ruling doesn't decide the case but it does indicate that the unions face long odds.

Kaul issued a statement vowing to keep on fighting.

"We will continue to stand up to the legislature's unconstitutional attempt to undermine DOJ's ability to get justice for Wisconsinites," he said.